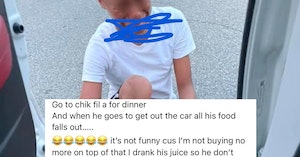 An image on Reddit is filling viewers with disgust after it was posted to r/insaneparents by Redditor u/mynameisethan182 under the explanatory title, “Laughing at your child because he’ll go hungry.”

Yes, that’s right, the mom saw her son weeping over a lost dinner, took his picture as he cried from hunger and disappointment, and then admitted she doesn’t plan to feed him and is laughing in his crying face:

“Y’all it’s not funny but I’m really bdfu!!! We leave football practice. Go to Chik-fil-A for dinner. And when he goes to get out the car all his food falls out….” she started. This is followed by a bunch of laugh-crying emojis for some reason.

“it’s not funny cus I’m buying no more on top of that I drank his juice so he don’t have anything like he really hurt,” she continued. “I ate di Pablo or whatever it’s called so I’m not hungry but I really feel for him prolly really hate me as a mom right now cus I can’t stop laughing.”

Babe, we all hate you, but especially for this:

There’s not much to say about a mom who is pretty much an abusive sociopath, but Illusion_Guardian123 said it best, if in a bit of a run-on sentence:

First of all, he came back from a sport, that uses energy, he must have been really hungry due to this, and if the mom had any brains, she would’ve know this, but she decides that bc the food fell out of the bag, instead of paying for his food again, or at least something, she is endangering her child and being a b——tch, posting it, and expecting a bad outcome, as she states “he prolly think I’m a bad mom rn”, he is in a state of hunger just after using a lot of energy. This is wrong on so many levels.

At the most basic level, parents are supposed to feed their kids. This is below basic.