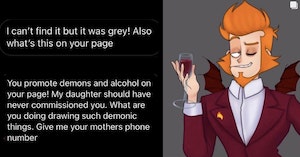 Artists have often been accused of consorting with the devil, from Rock and Roll music to Madonna’s music videos. I guess mostly music, now that I’m thinking about it. But now Redditor u/dippdot can join this list after a woman found them on the Internet and accusing them of warping her daughter’s mind.

“Entitled mom demands a refund and tells me to repent!” they wrote, posting the wild conversation on r/ChoosingBeggars, which is where people share stories about people trying to get money in the most entitled ways possible. This mom believed her daughter commissioned a drawing from u/dippdot and she wanted the money back.

“Hi so my daughter commissioned you last week for a drawing and I wanted to discuss the details of the purchase,” she starts.

“Oh what commission are you referring to?” they respond politely. “I did quite a few if you could give me some context to which one.”

“I don’t remember what it was but she paid $20 from my credit card for it for her stupid character,” she answers, escalating the conversation.

Based on their conversation, it doesn’t seem like the woman’s daughter actually did commission this particular artist, but the mom is still mad. Then she shares a picture from the artist’s web page and asks, “Also, what is this on your page.”

It’s a pretty hilarious drawing of someone with tiny bat wings enjoying a glass of wine.

“You promote demons and alcohol on your page!” she says. “My daughter commissioned you. What are you doing drawing such demonic things. Give me your mother’s phone number.”

Yes, the best possible idea is to give an unhinged person online your mom’s direct line.

Once again, the artist is polite and explains they’re not a minor and their mom doesn’t decide what kind of art they make. Also, if she can’t show proof of purchase, f-ck off. But polite.

She shares another of their drawings that is pretty hilarious, but which she obviously finds offensive:

Mom says, “People like you are the reason why demonic imagery is allowed into media today. Where can I leave a review on your artwork to warn others about what you post! I want my refund or I’m unleashing my followers onto you! You need to repent!”

Something tells me they didn’t repent for anything.