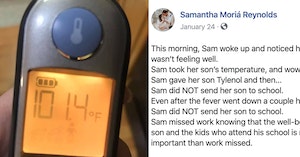 A mom’s Facebook rant has gone viral and it’s something ALL parents should read.

It shouldn’t take a genius to know that if your kid is sick, you should keep them home from school. But in a world where missing a couple days of school can make even younger kids fall behind in their schoolwork, and where parents’ jobs might not make it easy to stay home to look after a sick kid, everything becomes a little more complicated.

Samantha Moriá Reynolds is reminding all her fellow moms (at least those who are able) to just take it back to basics—if your kid is sick, your kid stays home.

“This morning, Sam woke up and noticed her son wasn’t feeling well.

Sam took her son’s temperature, and wow! A fever.

Sam gave her son Tylenol and then…

Sam did NOT send her son to school.

Even after the fever went down a couple hours later, Sam did NOT send her son to school.

Sam missed work knowing that the well-being of her son and the kids who attend his school is more important than work missed.”

Reynolds really stresses the importance of not allowing your sick kid to infect other children just because you think he shouldn’t miss school.

“Sam’s son was invited to THREE birthday parties over the weekend.
Sam’s son has been so excited to go, but he will unfortunately also have to miss them because Sam’s son is SICK.
Sam knows passing along a sickness would not be a great birthday gift regardless of how bummed her son may be.
Sam knows her son is still contagious until he is fever-free, WITHOUT medication, for 24 hours.
If Sam’s son is running a fever at 7am on Sunday, Sam’s son will also not be attending school on Monday.

Her post quickly went viral, with other parents and school faculty chiming in with their appreciation.

Others pointed out the obvious: if everyone stayed home while sick, fewer people would get sick! Go figure!

And Reynolds herself popped back in to comment hilariously on her rant’s reach.

“Now, if we can stop sharing the flu the way we are sharing this post,” she joked.