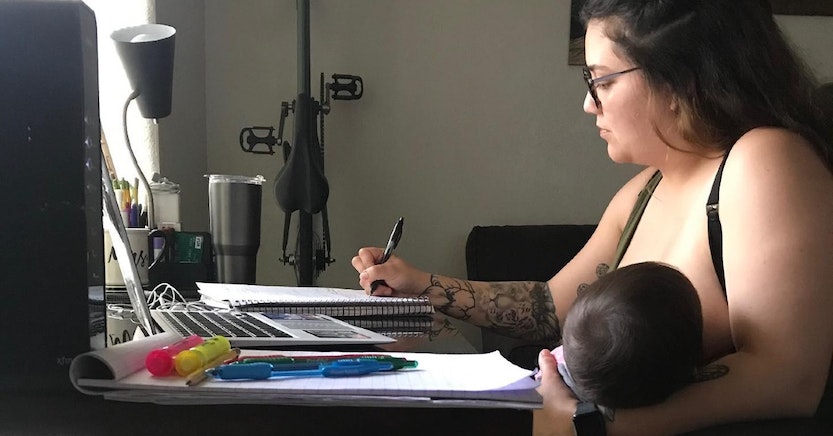 A breastfeeding mom was shocked and hurt when her professor shamed her for simply asking if she could turn her video off to breastfeed her baby during class, calling the activity “inappropriate” and the request “weird.” After the professor changed the virtual classroom rules to require all students to have both video and microphones on during class to receive credit, Marcella Mares sent him an email asking if she could simply turn her video off if she needed to breastfeed.

Instead of easily accommodating this request, the instructor dismissed her while exposing a stark level of ignorance on the subject matter.

“That’s not what you should be doing during class,” he wrote back. “Do that on your own time.”

That was bad enough, considering the fact that babies need to eat when they need to eat and anyone who’s ever been a mom knows that they don’t get their “own time” anymore. However, Mares was ready to accept this massive inconvenience to her family life, but the professor made it worse by mentioning her request to the entire class.

“The first thing he says to the whole class in our zoom meeting was ‘I got this really weird email from a student stating she needed to do inappropriate things during lecture time,'” Mares wrote. “‘You guys need to understand that you have priorities now and you need to put all those distractions aside or be creative when your child needs you and give your full attention in my class.'”

At first, Mares reported feeling hurt and humiliated, but then she got angry, realizing that it’s the professor who should be embarrassed for referring to the extremely natural activity of breastfeeding as “inappropriate” and a child’s needs as “distractions.”

“He discriminated against me and many others when he said ‘put those distractions aside or be creative when your child needs you’ like what the f—?! This is a child we are talking about not our phones or TVs or any other THING.”

In response, Mares posted a photo of herself taking notes during a virtual class while breastfeeding her child, proving that she can do it and that it’s far from “inappropriate.” She also wrote that her cousin has helped her with “taking action,” which we hope means someone’s boss got an email, at least.

According to BreastfeedLA, Title IX of the Civil Rights Act prohibits public schools from discriminating against breastfeeding mothers. This includes ensuring that “a student’s educational opportunities aren’t diminished due to breastfeeding.”

Hundreds of commenters have offered their support and praise to Mares for standing up to her professor and advocating for breastfeeding moms everywhere.