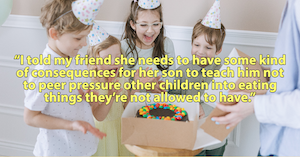 Some parents take it too far. I know we’re all concerned about our kid’s health and try our best to give them healthy options and encourage healthy eating. But guess what? If my kid wants French fries once or twice a week — he’s getting them. With carrots or some other vegetable. It’s all about balance.

But one mom on Reddit lost her mind because her son ate a piece of chocolate cake at his friend’s birthday party.

She even called his friend out for “peer pressure” even though the kid just said, have this cake! It’s great! Let’s all try our best not to help our kids along a path to disordered eating and a dysfunctional relationship with food, okay?

“My son is 8 years old and recently attended his friend’s 8th birthday party. This friend is my best friend’s son. I don’t let my son have any/much junk food at all and usually he brings his own snacks (for this incident it was carrot sticks and ranch) to events that have a lot of sugary foods,” the OP wrote.

“My best friend bakes a lot, and made a special chocolate cake for her son’s birthday. When it comes to my son, I don’t let him have cake. This is personal preference for his health, not for any allergy reasons, and he is not diabetic or gluten free. My son knows he isn’t allowed to have cake because of the additives. When he told his best friend this at the party, his friend apparently got upset and told him it was ‘good cake’ not bad like I say, because his mom made it, and it was his birthday cake. My son ate cake, got a sugar rush, and crashed, making him cranky for the rest of the day after we left the party.”

“I told my friend she needs to have some kind of consequences for her son to teach him not to peer pressure other children into eating things they’re not allowed to have. She said because it wasn’t an issue of allergies or health, that she’s sorry my son was cranky but she won’t be punishing her son or talking to him about it on his birthday. She says also that she’ll just that she’ll watch more closely/make sure her husband does in the future, as well as have a chat with him on another day about respecting food habits. (I love my friend, but historically, her and her husband have always said ‘yes’ to their son and not given him any consequences for anything.)”

“Both of us were present at the party and did not see them sharing the cake (they were outside eating in the backyard with their fathers and some other parents supervising while we cleaned up) so it’s not an issue of anyone going behind anyone’s back, just teaching children boundaries and respect. I let my son stay for the rest of the party and be with his friend, so it’s not like I ruined the day. AITA for being upset with my friend’s son and the fact that she won’t punish her son for pressuring my son into eating cake?”

“God forbid your son experience a moment of joy and celebration. YTA. FYI – ‘sugar rushes’ are a myth. They have been debunked many many many times by scientists and medical professionals. That your son was irritable for the rest of the day was likely because, having had fun at a friend’s birthday party, you pissed all over his enjoyment of the party with your ridiculous attitude and over-the-top indictment of the whole party. I can only imagine your son’s embarrassment at you having the utter gall to demand consequences for a kid, on his birthday, who shared his cake with your son (who, by your own admission has NO health issues that would be affected by said cake). It wasn’t the cake that made your son irritable, it was YOU. I seriously doubt that you being declared the asshole in this will in any way soften your views on such things. It’s perfectly fine to want to make sure that your kids eat nutritiously. You also shouldn’t be a fascist about it. In fact, the more you try to exert such iron control over it, the higher the likelihood you will drive your son straight into an eating disorder. There isn’t a doubt in my mind that your son has a stash of candy at various places. Because of YOU,” explained

“The tone OP sets doesn’t sound like it’s coming from concern for her sons health. More so, the control she has over him. If it was truly about the cake, it would be, ‘you know better’ to her son. But instead, it’s this big thing because mom has to make sure every inch is accounted for when it comes to what her child does. Sharing a piece of cake is nowhere enough sugar to give a kid a sugar rush. Nor enough to do any damage. OP HAS NO LEGITIMATE REASON OTHER THAN ‘UNHEALTHY.’ I second you though, it wasn’t a sugar crash. It was mom is ruining what little fun and normalcy he was experiencing. I bet OP has had cake, and has little snacks that aren’t ‘healthy.’ I’m sure if she keeps it up she’ll win the game of ‘Who’s going to the retirement home.’ YTA,” said

“YTA It was cake on a special occasion. Your son isn’t being fed cake daily. Also, you have issues with additives in cake, but find ranch to be acceptable? Edit: I’ve thought about this more and honestly if I was your best friend I would be pissed at you and asking you to talk to your own kid. He made her son feel bad about the cake she made him for his birthday. He felt the need to defend the cake and was upset by what your son said,” said

“YTA and here’s what is going to happen when your son realizes all of the food that he’s not allowed to eat. He’s going to sneak it, he will learn to sneak other things, he will have food issues, and possibly a weight problem. Kids need to be taught that food is fine and we eat in moderation,” said