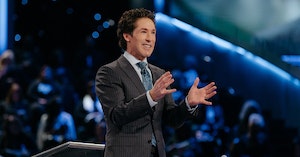 According to a local Houston news outlet, a plumber has claimed that he discovered a large amount of money behind a loose toilet in the mega-church run by the absurdly wealthy pastor Joel Osteen. The unnamed plumber told this story after calling in to a popular Texas radio show called “The Bull” and told the bizarre story of how he found 500 envelopes full of cash and checks while he was working on the church’s plumbing.

“There was a loose toilet in the wall and we removed the tile…well they removed the tile,” he said to host George Lindsey. “[I] went to go remove the toilet and I moved some insulation away and about 500 envelopes fell out of the wall.”

After being informed about this mysterious money cache, the Lakewood Church says they “immediately” call the Houston police in a statement confirming that yes, there was a ton of money behind one of their toilets. Apparently, there’s also a seven-year-old unsolved case at that department around $600,000 that disappeared from the church safe in 2014. The church reported this money as stolen but it was never found. Until now?

Joel Osteen and his mega-church have been frequently criticized for the mass amounts of wealth they both collect without giving much back to the community, preaching that Osteen is rich because God wants him to be in a convenient brand of Christianity known as “prosperity theology.” His net worth currently stands at around $100 million and he enjoys expensive luxury vehicles and living in a 17,000 square-foot mansion valued at $10.5 million.

It’s anybody’s guess as to why someone might steal $600,000 from the church safe and store it behind the toilet, assuming the two cases are even related, but the strangeness of this news has attracted quite a lot of public attention already. Some are accusing Osteen himself of foul play, or at least some member of the church staff, suggesting that they were trying to obscure the church’s real income by hiding it. Of course, despite its massive profits, the mega-church is still tax-exempt for technically maybe supposedly being a legitimate place of worship.

Regardless, any mention of Osteen in the news gets his critics talking about how messed up it is that a man who claims to follow Jesus Christ, who told his followers to give all their stuff away to the poor, yet living such a decadent life and claiming his God says it’s cool. Not only that, Osteen recently sucked up $4 million in PPP loans meant to help small businesses survive the pandemic despite the fact that the church never stopped running, being a televangelist set up in the first place.

The church tried to defend this as necessary for its hundreds of employees, yet somehow announced in October that they would be giving all that money back following the flood of criticism.

The combination of Osteen, money, and a toilet is practically irresistible.