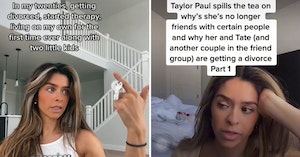 If you haven’t heard of “MomTok,” it’s a term given to a section of TikTok in which moms make videos about the various challenges of motherhood and parenting in general, and also a minefield of mom-related drama that never gets old. The latest high-profile scandal comes straight out of the Mormon subsection of MomTok, which is exactly as creepy as you would expect, and the resulting disaster is giving ex-Mormons a whole new reason to live right now.

Apparently, Mormon TikToker Taylor Frankie Paul, a popular user with over 3.5 million followers, caused a localized implosion in her online community by posting a video announcing she was getting divorced. This would be scandal enough for any Mormon community, which takes a dim view on the ending of marriages, but the details just get more incredible the deeper you go.

After posting the initial video announcing her divorce, Paul began dropping hints about the reason for the separation, saying things like “I can’t even speak on why … without bringing them all down with me.” Commenters began accusing her of cheating on her now-former husband, and her fellow MomTokers began unfollowing her and liking these comments, which fans from TikTok to Reddit quickly noticed.

Then, in a late May livestream, Paul reportedly admitted that she, her husband, and a small group of unnamed friends had been engaging in something she called “soft swinging,” by which she meant they were “intimate” but didn’t go “all the way.” In other videos, she said that her marriage had been of an open variety, which is generally not permitted in Mormonism, unless one dude wants to marry a bunch of ladies.

Regardless, this arrangement seemed to work out for the tightly knit friend group until Paul broke the rules by copulating with someone in the group who was not her husband. Not only that, but her reason for doing this involved the fact that she and the other man had developed “feelings” for one another. Now, three of the couples in the group are getting divorces, though she claimed one of the divorces has nothing to do with her cheating.

It also seems that Paul had been dropping hints about being in an open marriage and not believing in monogamy in the days leading up to the divorce announcement, but her fans had dismissed these hints as mere jokes. Then, one week after blowing up MomTok with her full confession, she announced that she would not be talking about what happened anymore, leaving the rest of the website to marvel at the destruction she caused and walked away from.

“After talking with my legal team, I have all rights to share my story if wanted,” said Paul. “However I feel that I shared a part and will not be sharing anything else from here on out.”

Swinging in Mormon communities is apparently not at all uncommon, in spite of the image they try to cultivate as the arbiters of traditional family values, which in Christianity generally means strict monogamy and in some sects, only having sex for baby-making. “Soft swinging” appears to be another way that Mormons skirt around these rules, saying it’s okay because they don’t have full penetrative sex with one another.

While there is absolutely nothing wrong with swinging as long as full consent is involved at all times, it’s things like this that seem to prove that religious chastity demands cannot and never will be able to constrain the force of human sexuality. Additionally, watching Mormons who want to take away other people’s rights to have sexual relationships in the way and with the people they want to implode over swinger drama is incredibly satisfying to watch.

Still, quite a few people feel that they would have been better off not knowing about any of this. Too late, you already read the article.