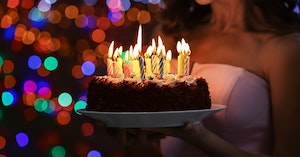 Daughter Says Her Mother Demands To Be Celebrated On All Her Children’s Birthdays, And Reddit Has A Word For That

A recent post on reddit’s Am I The A**hole forum has sparked a tough conversation about dealing with narcissistic parents.

The 25-year-old redditor shared that her mother expects her and her younger siblings to share their birthday celebrations with her, which includes purchasing gifts for mom in the case of the three of them that work jobs, including two teenagers.

“We’ve done it since we were little,” she wrote. “It was taught to be as ‘giving thanks for carrying + giving birth to us.’ Which I’m all for, I am grateful as we wouldn’t be here without her. The issue is though, it becomes less of our birthday and more-so an anniversary for the day our mom gave birth.”

She went on to describe the ways in which her mother tends to outshine the person with the actual birthday, and mentioned her dad gifting her mother a new MacBook on the redditor’s birthday while she received clothes and dishware herself.

But things came to a head recently when the original poster’s 16-year-old sister quietly apologized for only getting her a sweater this year after her mother pressured her to buy her a fancy necklace for the same occasion and she was worried about the backlash if she didn’t.

“I asked how much it was, and my sister said it was $300. I honestly lost it on our mom and chewed into her later that afternoon when my mom opened her gifts after me. I think she’s ridiculous for even wanting my sister to spend so much on a gift!” she wrote. “Mom started crying and my dad kicked me out. Mom won’t answer calls but my aunt (mom’s sister) called and said I was a POS for not respecting my mother and that I’m a selfish narcissist child for being jealous of the gifts mom got.”

Apparently, mom still isn’t talking, but has been sharing posts on Facebook about “letting go of the toxicity in your life” and some of her other relatives are egging it on.

Commenters readily assured the OP that she was not at fault here — and that a mother demanding to be celebrated on her children’s birthdays every year is extremely abnormal.

While the Redditor is clearly not the a**hole in this situation, she also updated to say people’s reactions to her story have encouraged her to try to find a therapist to “unload all this f**kery.”