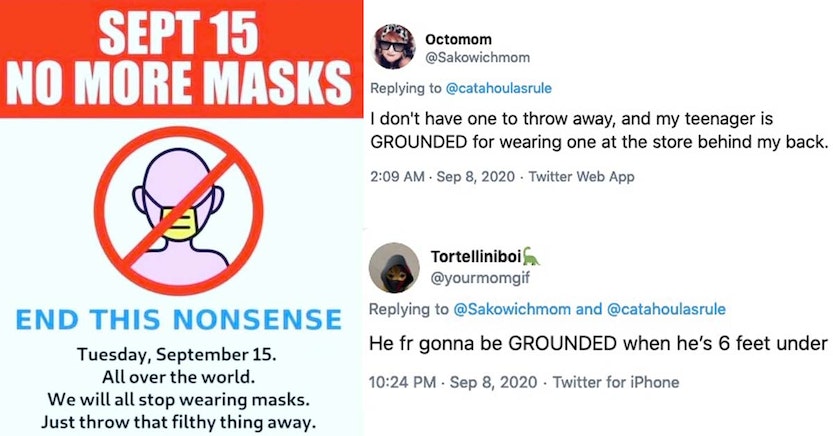 An anti-masker mother is getting dragged on Twitter after brazenly admitting that she actually grounded her teenage child for wearing a mask behind her back. Yes, you read that right. As if being a teen isn’t bad enough, just imagine being a teen with this woman for a mom!

The mother in question was responding to a tweet from a random #MAGA account, proclaiming September 15 to be “NO MORE MASKS” day. “End this nonsense,” states a graphic in the tweet. All over the world. We will all stop wearing masks. Just throw that filthy thing away.”

“I don’t have one to throw away, and my teenager is GROUNDED for wearing one at the store behind my back,” replied Twitter user @Sakowichmom, who is clearly the mother of the year.

I don't have one to throw away, and my teenager is GROUNDED for wearing one at the store behind my back.

It didn’t take long for the mother to get ratioed for her extremely problematic tweet. Many ridiculed her with memes, while others slammed her parenting skills or expressed sympathy or concern for her child. 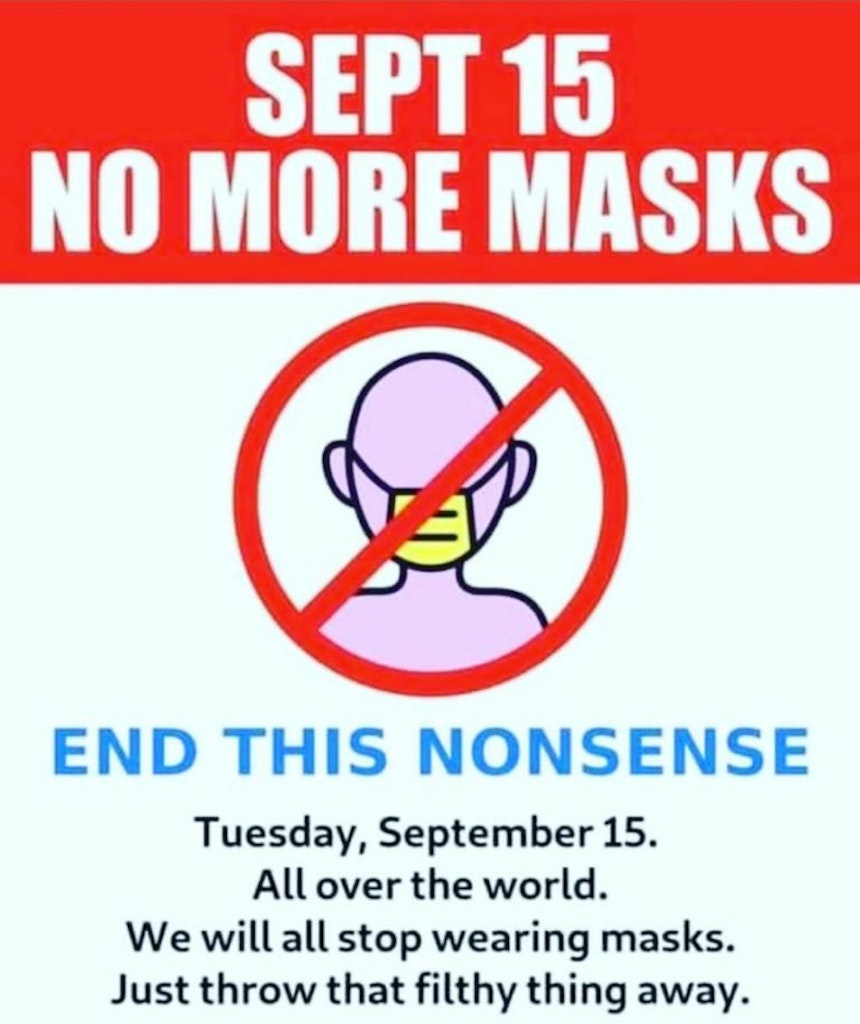 It seems like this woman is deliberately trying to make sure her kid never reaches the age where they can move out,” wrote one user, while another added, “He [for real] gonna be GROUNDED when he’s six feet under.” Others had similar sentiments:

When all is over, you should get arrested and be stripped from custodial rights https://t.co/rzK9uSi4dw

Context and me on the phone with child services https://t.co/CgpRXmhhJB pic.twitter.com/67fksZj0VQ

Imagine grounding your kid for obeying the law. https://t.co/nVaZeLytU2

I know that everyone and their dog has already seen this god awful Tweet, but I just want to say that this isn’t okay. This teen was trying to stay as safe as possible, and they got grounded for it. Not everyone should have kids, and this is why. https://t.co/mGhAcrxpv8

How your brain be looking like right now https://t.co/odtIIv4t3I pic.twitter.com/ZCoMaAc5MN

According to the Daily Dot, the author of the tweet appears to be a conspiracy theorist and Trump supporter by the name of Kristina L. Allen, who also runs at least one other Twitter account under the name “Octomom.” In other words, that means she’s ostensibly got seven other children she’s doing a bad job at parenting.

Q & Yeshua,it was always part of GOD's plan. t took 3yrs studying just this topic, thenn 2yrs to write it. My final work for GOD.
https://t.co/L1uYtB2PVa
Equating Q to the Biblical prophecy, and how GOD planned this & His OT His curve ball that caught the church looking. pic.twitter.com/riuZktfz8c

Surely, it will also come as a huge surprise that Allen also subscribes to QAnon—the conspiracy that claims Democratics, Hollywood elites, and other prominent liberals belong to an underground group of satanic, baby-eating pedophiles—as she writes in a recent blog post is titled “JESUS IS A CONSPIRACY THEIST.”

Then again, on the other hand, maybe getting grounded over wearing a mask is the least of her kid’s problems.