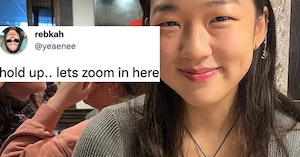 Racism and assault against Asians in America has been higher than ever since the start of the pandemic, and the gesture of pulling back one’s eyelids to “appear Asian” is grossly unacceptable — and yet one mother was caught on camera teaching this action to her daughter in the background of a photo taken at a ramen restaurant in Atlanta, GA.

Rebekah Lee, a 19-year-old student at Emory College of Arts & Sciences, was enjoying a meal at Ton-Ton Ramen restaurant at Ponce City Market when she discovered that her cute mealtime picture was photobombed by the racist mother and her daughter in the background.

Lee was clearly in disbelief that the mother was so casually teaching her daughter the racist gesture while eating at a Japanese restaurant. Some commenters tried to excuse it as “exchanging telepathic messages” or rubbing their temples, but it very clearly isn’t that.

“[I] had my picture taken when the food came out,” Lee told NextShark. “I did not notice the people behind me at all. I had heard giggling from the two, but I presumed it to be a happy family outing. After receiving the pictures later that night, I noticed that scene in the background of my picture. I tweeted the picture the next day, not expecting the reception I received.”

Her tweet went viral with over 519K likes and well over 73.9K retweets and quote retweets combined. Lee wrote in the tweet, “Hold up.. lets zoom, in here,” zooming in on the photobombers in the background.

This sadly isn’t the first time the student has experienced anti-Asian racism regarding her eyes, as she shared in a follow-up tweet.

In Lee’s interview with NextShark, she continued, “Although I can’t confirm that the faces that the parent and child were making were truly meant offensively, I can’t deny the context and situation that they are in.”

People on Twitter shared their dismay and disgust at the actions of the mother.

“Throughout our lives, our eyes have been weaponized against us and now we’re being told that we should be grateful that society is finally embracing them,” Alyssa Ho, an anti-racism advocate, said of the trend.

“Asians have been bullied, ridiculed, ostracised, mocked and humiliated for our eyes [and now] our eyes have been appropriated to become a trend that many take part in for the aesthetic rather than to show appreciation,” she added.

“For many Asian-Americans, the gesture represents the concept of otherness,” wrote reporter Cary Chow. “When others reduce your entire identity to a simple facial feature, it can have a lasting psychological effect.”