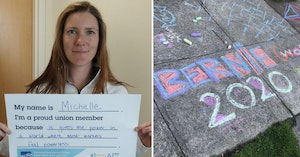 A heartbreaking Twitter thread on the nightmare of dealing with a greedy health insurance company while trying to keep it together after her one-year-old son was hit by a car and later died in the hospital has been sweeping across the internet since it was posted Sunday. Writer Michelle DuBarry shared her experience in order to support Bernie Sanders’ Medicare for All program, arguing that no parent should ever have to battle with insurance after suffering the worst loss imaginable.

In 2010, I had good union health insurance. Obamacare was the law of the land. In November that yr my 1yo son was struck by a careless driver in a crosswalk. After two surgeries and a night in intensive care, he died.

Even before the child died, DuBarry and her husband had to worry about insurance deductibles and generally about whether they would be able to afford their medical bills even with “good union health insurance.” Unfortunately, they would find no relief from the Family and Medical Leave Act of 1993 and, as everybody who has lost their employer health insurance knows, COBRA is worthless.

I googled FMLA and learned I wouldn't qualify b/c I hadn't been at my job for a year. If I lost my job we would both be without insurance. Without my income, there was no way we could afford $1K/month COBRA.

Soon after their baby passed away, their insurance company and the hospital that treated him began to make the grieving parents’ lives even worse. Michelle’s husband was also injured in the accident but was unable to receive proper treatment due to a ridiculous catch-22 created by the combination of car insurance and health insurance.

My husband who was also injured in the crash, was refused treatment by his primary care doc b/c she didn't accept payment from auto insurance and his health insurer wouldn't pay til we exhausted our auto insurance.

DuBarry asked readers to imagine having to deal with all of that just days after losing a young child because your husband desperately needs medication and still having to pay out-of-pocket expenses to a hospital that put a lien on your house.

We ended up with around $5K in out-of-pocket expenses and our health insurer paid $175K. Eventually, we'd receive a settlement from the at-fault driver. For a minute, we thought we might be OK financially.

What happens next is perhaps the most infuriating part of the whole ordeal. Frankly, it’s to her credit that Michelle DuBarry didn’t go on some kind of rampage in her health insurance company’s headquarters.

“Then our health ins. co. came after our pain and suffering settlement,” she explained. “They demanded reimbursement for the $175K they were out. Turns out they were legally entitled to do that.” And they got it.

(Side Note: It took me 8 yrs but in 2019 I initiated and passed a bill making this practice illegal in OR. It remains legal in many states.)

It’s bad enough having to deal with an insurance company and a legal system right after losing a one-year-old child to an accident caused by the negligence of another driver. It’s unimaginably cruel to take away the settlement money that the grieving parents could have used to take some leave from work so that they could focus on dealing with their trauma instead of focusing on avoiding bankruptcy. DuBarry imagines a better system.

Despite Obamacare and "good" union insurance, we were nearly bankrupted by a 27-hour hospital stay.

She further warns that health problems will eventually happen to every one of us, even if it’s not as horrific as what she went through. All of us will experience loss, and none of us need to have to negotiate with profit-driven health insurance companies while we grieve.

There is no compromise on healthcare that doesn't leave millions of people unacceptably vulnerable to corporations trying to profit from sick and injured people.

DuBarry concludes her thread by stating her support for Medicare for All and the candidate who first supported it and wrote the bill, Senator Bernie Sanders.

I believe change is coming. I am ready to fight for other families, for #MedicareForAll, and to elect @BernieSanders president. Sending solidarity and love to all who are suffering under this awful system. ❤️????

Currently, Senator Elizabeth Warren is the only other candidate with a Medicare for All plan that compares to Sanders’. Bernie Sanders has gained an early lead in the Democratic primaries, handily winning the Nevada caucuses over the weekend.

This thread shows why we cannot maintain the status quo of our profit-driven health care system.

We must end this inhumanity and pass Medicare for All. https://t.co/WWzG28K13a