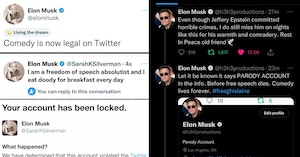 Over on Twitter, where comedy is allegedly now legal, Elon Musk has been issuing bans on popular accounts that changed their display names and profile photos to his after multiple celebrities and influencers did so to mock him.

This was around the time that he announced a new rule via tweet that anybody impersonating someone in this way must make sure they are “clearly specifying” that it’s a parody, though he did not specify what that would look like.

As a result, accounts that have included the word “parody” in their display name, Twitter bio, and banner image have still been suspended, making this all seem like there aren’t really Twitter rules anymore so much as Musk’s whims.

In the chaos of the last few days, while Musk rolls out poorly planned new features and rules while laying off half his new workforce (and then begging some of them to come back), a number of accounts were either permanently banned or temporarily suspended. Musk claimed there would be no warning before a permanent ban for this form of comedy, but as usual, he had to change his mind a few dozen times because he didn’t think it through.

The logic for whether these accounts were permanently banned or temporarily suspended appears to be arbitrary, at least as far as we know, since Musk still has not put out specific and clear guidelines to his sudden new policy. If anything, the decision seems to be based on just how badly the account in question burned the new Twitter boss, which would make sense since this policy seems to exist only because Musk got mad that people were making fun of him a lot.

Kathy Griffin remains banned while Silverman has returned after only being locked and returning her account to its previous state, though she has not stopped mocking the billionaire.

The Chaser apparently had their account “temporarily restricted” and were directed to change their name from “Elom” Musk to something else, but the apartheid emerald mine heir might not like the new direction they chose to take.

Ethan Klein, meanwhile remains suspended after tweeting something particularly damning about Musk while impersonating him related to that one photo you’ve probably seen several times lately if you’re on Twitter.

“Ghislaine Maxwell is an extremely decent woman who I had the pleasure of meeting several years ago,” Klein tweeted. “It’s a shame she’s been demonized and ran over by the press. #FreeGhislaine.”

This ban has been viewed as particularly egregious considering the fact that Klein went to extensive lengths to follow the new and vague account impersonation rules, putting the word “parody” in his bio, banner image, and after many of his tweets.

Making vaguely defined rules that can be interpreted many different ways and then applying said rules arbitrarily based on the whims of the powerful is an old and storied political strategy. Perhaps this is somehow related to the fact that Musk just tweeted out an endorsement for all Republican candidates in a way he never did when a Republican was president.

Meanwhile, Griffin is fighting back from her mother’s old account, left unused after she died in 2020. In doing so, she managed to goad Musk into admitting that his application of the rules is entirely arbitrary with a petty tweet offering to reinstate the comedian’s own account for $8 — the price of the now useless blue check.

In spite of impersonating Musk in the same way, Griffin’s mom’s account remains untouched — possibly so his petty attempts at humor can remain on full display, because he’s that pathetic.

She also gave him a free yet pointless critique on his alleged comedy, which nearly always prove to be utterly embarrassing, pointing out that yet again the only time he can ever make a joke even bordering on funny, it’s because he stole it. After quipping that Griffin was banned for “impersonating a comedian,” Griffin hit him hard.

“I mean… you stole that joke, you a–hole,” she wrote from her mom’s account. “People have been posting that joke for hours, you hack.”

The carnage is expected to continue until Musk gets mad enough to nuke the whole site from orbit.