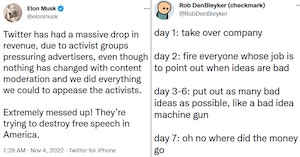 Newly crowned Twitter boss Elon Musk is, as expected, finding out. Following a huge spike in hate speech on Twitter almost immediately after the deal was confirmed done, mass layoffs in departments including account moderation, and a disastrous plan to turn verification into a fake clout badge, advertisers have gone from concerned to, well, gone.

“Twitter has had a massive drop in revenue, due to activist groups pressuring advertisers, even though nothing has changed with content moderation and we did everything we could to appease the activists,” Musk tweeted Friday morning.

As many have already pointed out, advertisers taking their money to less risky venues is not a violation of free speech, but rather capitalism operating as normal, like it did when it gave this guy billions of dollars for the accomplishment of being born to an apartheid emerald mine baron.

To make this even funnier, Musk’s tweet has been hit with a new Twitter feature that launched for many users not long before he officially took ownership of the platform.

The feature allows users to add context to tweets that many feel are lacking it and vote on whether said context is helpful. Musk’s whiny tweet about losing yet more money now has a disclaimer explaining that advertisers are leaving due to legitimate business concerns, not pressure from mysterious “activist groups.”

Not long ago, General Motors and Ford were in the news for pausing their Twitter ads, but according to the sources listed in this context disclaimer, they’ve now been joined by General Mills, Pfizer, Audi, Volkswagen, and Mondelez International Inc. (the Oreo company).

Musk’s strategy to address these issues seems to primarily consist of attacking Twitter users in general for criticizing his actions and/or hating his guts, which is definitely the way to keep people from ditching the platform en masse and rendering it worthless, right?

The good news for Musk is that with this latest self-pitying tweet blaming everybody but himself for his problems, there’s plenty of engagement on the platform right now because it’s time to dunk on Elon.