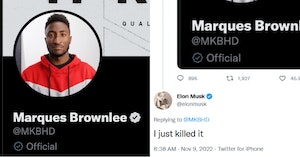 Elon Musk continues to baffle Twitter users and everyone else by seeming to randomly flail about with his various bad ideas as the Tesla stock price continues to tumble.

After rendering the original verification badge effectively useless for actually verifying if an account is authentic or not by allowing anyone to buy one for $8 a month, Twitter suddenly introduced an additional symbol that seemed to replace the previous feature.

For a few hours, accounts belonging to certain public figures including government officials, respected journalists, and certain celebrities had a gray badge below their display name labeling them as “official.” This seemed like it would ease fears that impersonator accounts would wreak havoc on the platform by buying the blue check, which was already happening with accounts posing as LeBron James and Twitter itself, by basically reintroducing an obliterated feature.

Then, just about three hours later, Musk tweeted that he “killed it.”

He then tweeted that the blue check “will be the great leveler,” doubling down on the claim that a virtual badge anyone can buy will somehow make the social media platform more democratic. Meanwhile, people are apparently falling for crypto scams because impersonator accounts are getting massive traction before they can be banned. Another account had people thinking that LeBron James had requested a trade away from the Lakers, which upset quite a few fans before it was taken down.

No one seems to know what could have possibly inspired Musk to make these slapdash moves, with the only hint coming from the billionaire himself in a tweet which admitted that “Twitter,” by which he means himself, will be doing some “dumb things” for a while.

“Please note that Twitter will do lots of dumb things in coming months,” he wrote. “We will keep what works & change what doesn’t.”

Always the best business model, and surely has nothing to do with the fact that he had to sell another $3.95 billion in Tesla stock recently.

While some folks are thoroughly enjoying watching this apparent train wreck unfold, others are not happy with Musk screwing around with features like this when he’s been demanding that the workforce he halved sleep at their desks to meet his tight deadlines. An internal message obtained by Insider painted a grim picture of a deeply toxic work environment that allows for no personal life whatsoever.

“The expectation is literally to work 24/7 to get this out,” said the message about the efforts to turn the blue check into a cringe clout badge.

At this point, it’s getting harder to ignore theories that Musk is intentionally trying to burn the platform to the ground for reasons locked away in his bizarre money-poisoned brain.

It’ll be funny until it’s not.