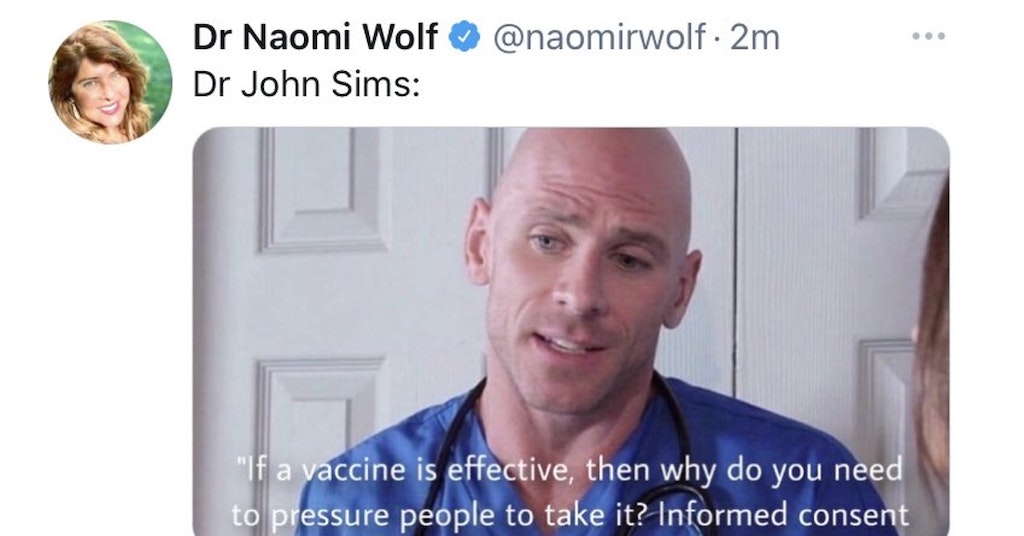 
Author Naomi Wolf is facing ridicule after falling for a prank that just goes to show how little fact-checking anti-vaxxers do before spreading blatantly false misinformation.

Over the weekend, Wolf shared an image of a doctor with a quote superimposed over it:

“If a vaccine is effective, then why do you need to pressure people to take it? Informed consent means letting patients make their own choices.”

The statement was attributed to Dr. John Sims, MD.

Wolf, who has been rampantly peddling fear and distrust of the vaccine ever since the rollout began, tweeted the image out to her followers, who then reshared it on their own timelines.

There was only one problem — it wasn’t real.

Ken Klippenstein claims he slid into Wolf’s DMs with the image in the first place, to see if she would share it without checking for a source.

It didn’t take long after that for Wolf to hear that she’d been pranked and delete the tweet, but not before people started ragging on her for falling so easily.

If anything, Wolf may have been an easy target, considering her disregard for fact-checking actually got the U.S. publication of one of her books canceled back in 2019, and a book she wrote 30 years ago has also come under scrutiny for its lackadaisical approach to facts.

Still, some people tried to defend her, noting that all sorts of people share random memes on social media every day without fact-checking — but that’s kind of the point. This is how misinformation gets spread, and the more of a reach a person has, the more responsibility they have in regards to what they use their platform to share.

And if people can make up quotes to support an anti-vaxxer stance, they can certainly misinterpret or misrepresent scientific data — always dig around for the real facts.