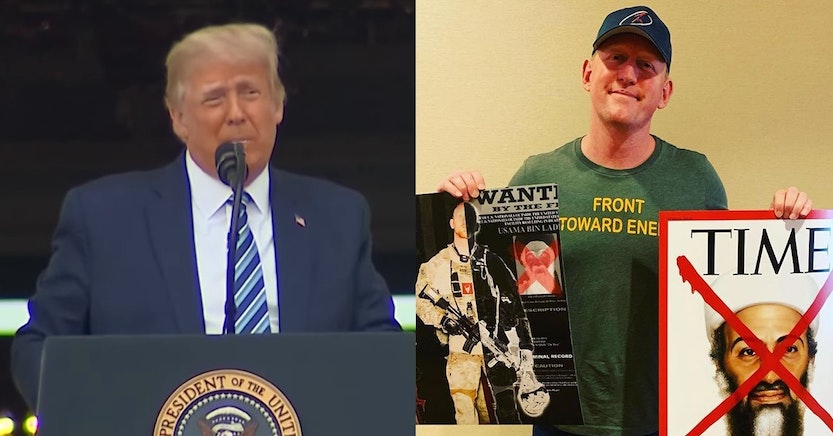 Former Navy SEAL Robert O’Neill, who is most well known for claiming to have been the one to actually shoot Osama bin Laden, is pushing back at the president after Trump shared a conspiracy theory suggesting bin Laden wasn’t killed as the public was led to believe.

Trump retweeted some QAnon nonsense on Monday, this time spreading a wild theory involving blood sacrifices and the idea that it was actually a body double that was killed rather than bin Laden himself.

Based on the content of the tweet, it seems entirely possible Trump just looked at someone saying negative things against his political rivals and hit smash on that RT button.

But O’Neill, who has expressed his support of Trump in the past, took issue with the president’s promotion of the theory.

“Very brave men said goodby [sic] to their kids to go kill Osama bin Laden,” he wrote. “We were given the order by President Obama. It was not a body double. Thank you Mr. President.”

He followed up with several additional responses, including one to a since-deleted tweet that presumably criticized his claim, saying “I know who I killed, homie. Every time.”

Though O’Neill has been the subject of some controversy himself this year, most people agreed with him that the theory was too out there, and also felt that President Trump’s decision to amplify it was reckless.

The account that originally shared the conspiracy theory as retweeted by Trump has been suspended, but, of course, that isn’t stopping the QAnon folks from running with it.