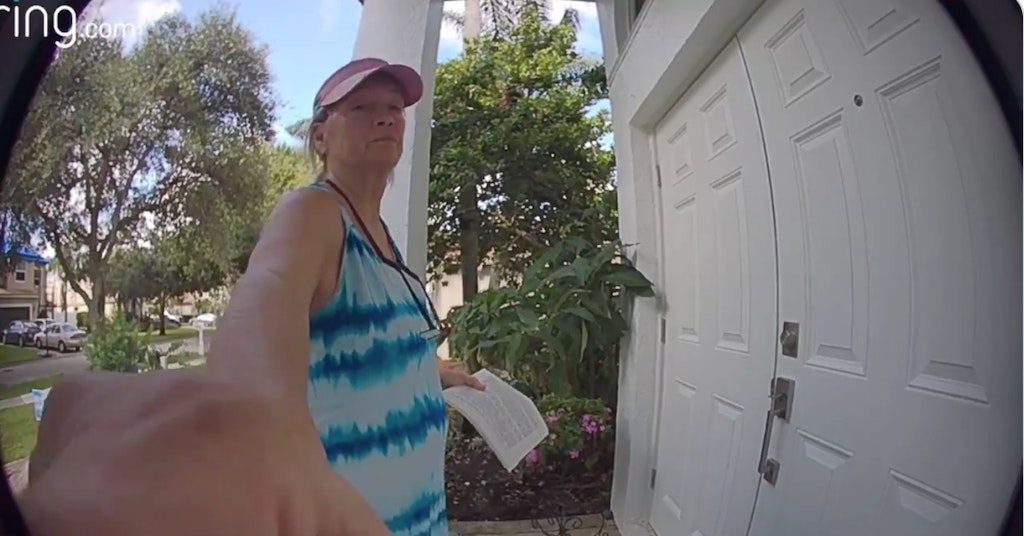 
A video showing a Trump supporter threatening to sue her neighbors over their Biden-Harris lawn sign has gone viral as the voter divide over the 2020 election grows even deeper.

The footage was captured by a Ring security camera, which shows the woman impatiently ringing the doorbell several times before the homeowners answer from inside.

“I want to show you something,” the woman says, but the homeowner responds that she is unable to get to the door at the moment.

“Get out your neighborhood bylaws,” she immediately demands, waving around a printout she’s brought with her. “‘No signs shall be in the yards.’ If you don’t take this Harris-Biden s—t down, I will sue you.”

In case it isn’t clear at this point that the woman’s motivations are based in politics rather than just some desire to keep the neighborhood matching a certain signless aesthetic, she follows up by claiming she was going to have the homeowners sell her house.

“But that’s not gonna happen now, and you’re gonna lose a lot of business because of this crap,” she continues. “You get out your neighborhood association bylaws. Section 5! Point! 20!”

And without a moment’s hesitation, she storms off across the front lawn like a child throwing a tantrum.

People who viewed the video were in awe of her behavior.

And some folks shared similar experiences they or people they knew had had over yard signs.

Unfortunately for the angry neighbor, even if the homeowners do ultimately have to take down their sign, yelling at them and threatening them to make it happen probably won’t change how they’re voting. But it sure does make for some absurd short entertainment for those of us watching at home.