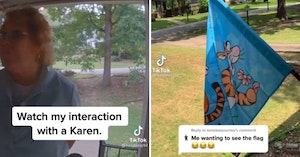 Anybody who’s ever had neighbors knows that there are occasionally things worth complaining about when it comes to the people who live around them, including loud parties, early-morning lawn mowing, and those lovely neighbors who have nothing better to do than complain. One such woman is being dubbed a “Karen” for interrupting her neighbor’s day because she had a problem with a flag they were flying to the point that she threatened to get the local homeowners association or something involved.

Was it a political flag of some sort? No, it’s a cute little novelty flag featuring beloved children’s character Tigger holding a pink flower.

The video, caught on the Tigger flag owner’s doorbell camera, shows the older woman greeting her neighbor in a friendly enough manner and saying “I want to talk about this, uh, Tiggers flag.” The TikTok user, who goes by Ambrosia on the social media platform, had to include the caption “yea, you heard right” for all the confused viewers who were sure that they didn’t just hear the words “Tigger flag.”

The woman doesn’t answer initially, instead mentioning that she does approve of the U.S. flag hung out front and offering a number of thinly-veiled insults about the way Ambrosia keeps the outside of her home.

It takes over a minute for the Karen to finally give any explanation as to what the problem is she has with the flag, first going through the process of threatening Ambrosia with the rules, even though she doesn’t know what they are or if any exist that would disallow an image of the one and only Tigger.

“We have rules, I don’t want to have to go find out what they are, but, I don’t like that,” says Karen in a perfect microcosm of what’s wrong with this mess of a country.

Ambrosia tells her that it’s not a homeowners association thing, apparently knowing something about the actual rules, but the Karen claims that there are some other rules “called Williamsburg something.” Having finally found out that the woman’s problem is that she personally finds the Tigger flag “tacky,” Ambrosia lets Karen know that she disagrees but that she is entitled to her opinion.

The nosey neighbor thankfully leaves without much fuss, but promises that she’ll “find out about it” in reference to the supposed anti-Tigger flag rules.

While incidents like this can and have gone a lot worse, this particular video is a reminder to many about how ridiculous neighbors can get about the tiniest, most innocuous thing and how homeowners associations (or something) are run by petty tyrants more concerned with property values than living.

According to Ambrosia in a follow-up video, the Karen apologized in an unusual fashion after the original went viral, doing what the TikTok user called “a drive-by apology.”

“She was literally driving by when she shouted out the window, “I’m sorry! Sorry!'” said Ambrosia.