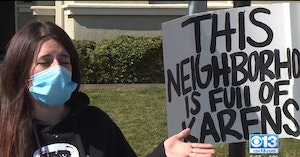 A mother in West Sacramento, California, became fed up after dealing with multiple noise complaints and neighbors calling the cops on her kids for skateboarding in front of the house. As a form of public retaliation, she hung a sign from her kids’ basketball hoop making her feelings known.

“THIS NEIGHBORHOOD IS FULL OF KARENS,” it reads.

“Karens,” if you didn’t know, refers primarily to middle class and richer white women who tend to complain about minor inconveniences.

According to the local CBS news affiliate, Raquel Davis reached her breaking point after a neighbor complained about the noise her kids were making while skateboarding during a birthday party for one of them.

Davis says that the police have been called on her children at least three times in the past few months, but she doesn’t see what the problem is when her kids are playing outside in the middle of the day.

“I didn’t know it was not okay for kids to be outside skateboarding,” she said.

“I felt this is my son’s birthday party. They’re out skateboarding and I guess I was at my final straw. My last thing. I don’t know what to do so I put up the sign.”

The neighbor who complained this time reportedly said that he could hear the kids from inside of his house and that he had a problem with the “language” they were using.

CBS13 also interviewed one of the disapproving neighbors, who compared the house with Davis and her seven kids to a college movie fraternity.

“These folks moved in and it’s basically ‘The Animal House,’ house in the neighborhood,” said Bruce Foster. “There is like no sense of noise control.”

Davis and her neighbors appear to have reached an impasse as she doesn’t think she can or should need to turn the volume down on kids playing outside during the day, while the neighbors seem like they’re not done complaining.

“They need to start recognizing that they have neighbors,” Foster continued. “That’s what it’s going to take. There’s no other alternative. The neighbors are not going away.”

“I don’t know how to turn down boys skateboarding,” said Davis. “I mean we’re outside. It’s during the day.”

Davis also told Newsweek that a few neighbors have now complained about the sign and that some had even confronted one of her sons about it, demanding that he take it down.

It does not appear that a satisfying solution has yet been reached between these feuding neighbors, though Davis has launched a petition asking that a skate park be built closer to her home. This, however, might not make her neighbors happy after they said that the “people that live here did not move next to the park on purpose.”