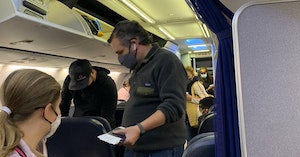 If everyone’s still harping on Ted Cruz’s sudden jaunt down to Mexico in the middle of a crisis, it’s because it’s still just so ridiculous that it’s hard to believe even Cruz made such an obvious blunder.

But as more and more information comes out, it seems as if it may not have even occurred to the Cruz family that a senator ditching his state in the middle of a humanitarian crisis would be a bad look—not to mention a poor moral choice.

Text messages reportedly showing Heidi Cruz, Ted’s wife, talking to their neighbors about the trip beforehand, were obtained by Reform Austin and are now circulating online.

“Anyone can or want to leave for the week?” she asked a group of at least nine others. “We may go to Cancun there is a direct flight at 445pm and hotels w capacity. Seriously. Covid test to come back which we will take there.”

It’s unclear when exactly the texts were sent, but they appear to be from early this week, suggesting the trip was a last-minute decision directly in response to the weather, rather than a long-planned trip they simply didn’t want to cancel.

This is in line with Cruz’s odd defense that his young daughters wanted to go to Cancun since school shut down and he just wanted to be a “good dad.”

Heidi went on to list their itinerary, including a return flight on Sunday and mentioned that the rate for their room at the Ritz Carlton was $309 plus tax.

Cruz himself actually wound up coming back on Thursday after the backlash for the trip—something he originally led the public to believe had always been the plan, but information from United Airlines as well as this text thread suggests otherwise.

He eventually conceded that he had, in fact, planned to stay the weekend but claimed he had second thoughts and realized the whole thing was a “mistake.”

That he actually got to Cancun and turned around only when called out speaks volumes about Ted Cruz, as does the fact that his neighbors are willing to turn over text messages to rat the family out.

At this rate, Cruz might as well just have stayed in Cancun. It doesn’t sound like he’s particularly welcome in his own neighborhood, either.