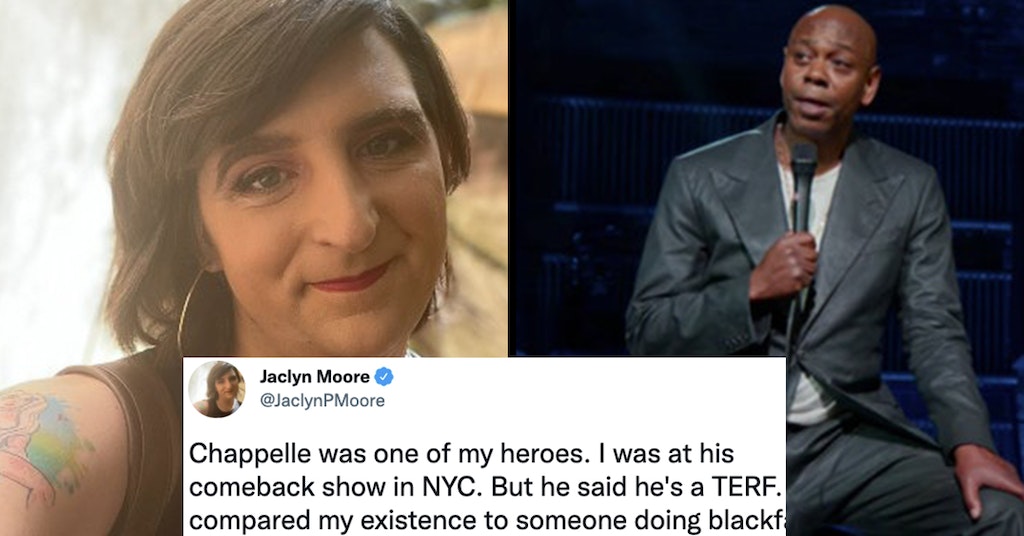 The former co-showrunner of Netflix’s Dear White People has announced that she is boycotting working for the streamer due to their decision to platform transphobic content in Dave Chapelle’s recent controversial comedy special.

Chappelle’s special, The Closer, has had emotions running high for days, as the LGBTQ community denounces the transphobia and homophobia rampant throughout, and his fans continue to defend him.

Moore, a trans woman who ran Dear White People for four seasons alongside creator Justin Simien, was among the critics, writing on Wednesday, “I’ve loved working [at Netflix]. I will not work with them as long as they continue to put out and profit from blatantly and dangerously transphobic content.”

While some of Chappelle’s defenders claim there was nothing transphobic, in actuality, he outright referred to himself as a TERF (trans-exclusionary radical feminist), compared trans’ women’s genitals to meat substitute products, and painted trans women as violent people who “want [him] dead,” among other grievances.

He also repeatedly positioned the LGBTQ community and the Black community against one another, quipping at one point that in America, “you can shoot and kill a [N-word], but you better not hurt a gay person’s feelings!”

“It is much easier to commit violence against someone that you think is immoral or a liar…someone not worthy of your respect. That makes it much easier to hurt me,” Moore said in a subsequent interview with The Hollywood Reporter. “He says, ‘Please stop punching down.’ I don’t know in what world trans women control the universe because from where I’m sitting, Dave Chappelle has all the specials, all the money, all the things. I just want my friends to not get killed.”