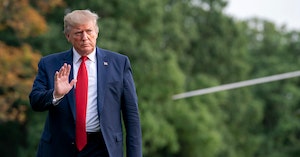 A man gathers his friends around a large meal. He has some important things to say—like, “I am the King of Israel” and Hilary Clinton is a “nasty woman.” His followers roar “Lock her up!” as they chow down on fast food and Big Gulps.

Then, the man announces that one of his followers will betray him. The mood turns dour.

“Just kidding!” he laughs heartily. “Who would do that? I’m the Chosen One!”

Such is the scene playing out on the cover of today’s The New York Daily News, a glorious parody of Leonardo da Vinci’s mural The Last Supper with Donald Trump and his nearest and dearest instead of Jesus and his apostles.

The cover responds to Trump’s eventful Wednesday, in which he tweeted his thanks to right-wing conspiracy theorist Wayne Allyn Root, who absurdly claimed on Tuesday that Jewish people consider Trump the “second coming of God” and the “king of Israel.”

In the original The Last Supper, da Vinci portrayed each apostle specifically reacting to Jesus’ announcement that one of them would betray him. So, let’s take a look at how they’re reacting on The Daily News cover. 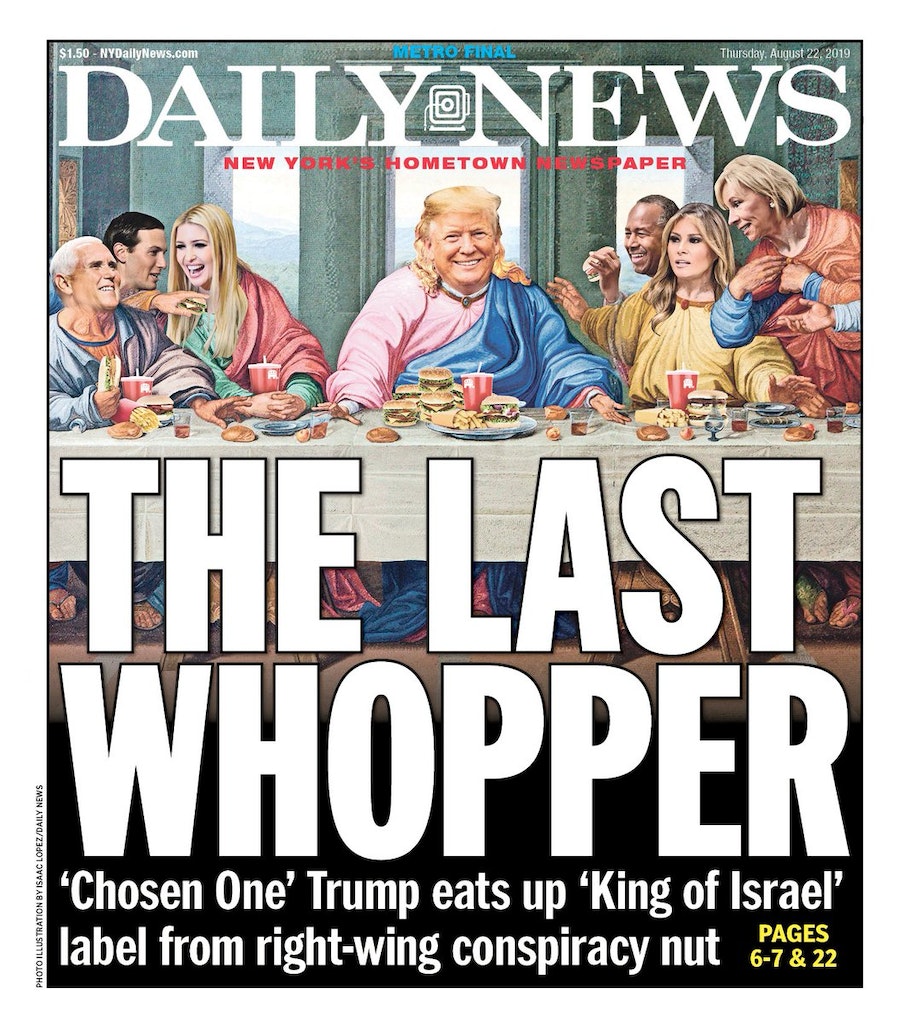 In the parody, Trump is sitting in Jesus’ position. Trump’s glorious blonde mane cascades over his shoulders, his tiny hands stretching for the fried bounty before him.

I love how small they made his hands ????

Melania sits to his right, in James’ position. She recoils in horror and shields Trump from the figures behind her, illustrating her complicity and actions to preserve this abomination of an administration. Behind her is Urban Development Secretary Ben Carson in “Doubting” Thomas’ position, clutching a hamburger and laughing. Education Secretary Betsy DeVos is Phillip, gesturing “who, me?” to herself.

On the other side of Trump, Ivanka is in John’s position—the apostle “whom Jesus loved” according to the Gospels. In the original, John looks devastated. In the parody, Ivanka is practically howling with mirth.

Next to Ivanka, in Peter’s position, is Jared Kushner. At the beginning of the Last Supper, Peter initially refused to let Jesus wash his feet, but then Jesus threatened him by saying, “If I wash thee not, thou hast no part with me.” Kushner was originally thought to be tempering Trump, but over time that appears to be radically not the case.

And then we get to Vice President Pence in none other than Judas Iscariot’s seat. Judas, who betrayed Jesus for money, eventually hung himself. Pence is laughing with glee as he reaches for some fried food at the same time as Trump’s itty bitty hand—signifying Pence’s betrayal. Shocking!