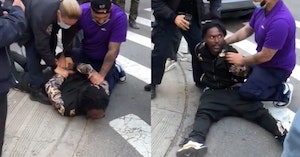 A TikTok showing New Yorkers detaining a man who allegedly assaulted an elderly Asian woman is serving as a reminder for how communities should react in the face of racist violence.

The video begins after a large group of people has already caught up to the man and pulled him to the ground.

“Hit a woman for no reason?” one bystander asks. “You’re a punk.”

One good Samaritan has the man’s arms behind his back and a police officer approaches to officially handcuff and detain the man.

“Thank you guys, I appreciate it,” she tells the crowd before calling for back up.

At that point, they start to disperse, but a few guys stick around to express their further disappointment in the suspect for allegedly attacking someone.

“This is my neighborhood, bro,” one tells him.

It’s unclear where in New York City the alleged attack took place, or what exactly happened, but the uptick in hate crimes against Asians in the United States has put people on edge.

Just last month, NYC security guards were caught on video ignoring an attack that happened on an Asian woman right outside the door of the apartment complex where they worked. Their refusal to step in to help — even after the attacker had already fled — sparked almost as much outrage as the attack itself.

Conversely, the men who allegedly chased down this suspect to detain him for police have been met with praise for stepping in and defending their community.

“STOP BYSTANDER EFFECT,” wrote @kay.tin. “This is exactly what all of us should do when we witness acts of discrimination or injustice against innocent people.”

“Those security guards who closed the door on that old lady can learn something here!” added @the_real_chill_bill.