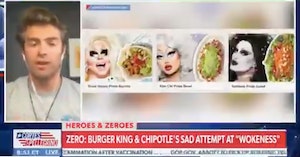 A Newsmax clip is going viral on Twitter for its series of bizarre claims about Chipotle and their “drag queen burritos.” I have honestly been looking up and down for who the heck this man that looks like Andrew Garfield’s stunt double is, or why we should care about his opinion, but making fun of that opinion is still fun. You can tell by all the dunks everyone is making on him.

Posted by Media Matters researcher Jason Campbell, in the clip two Newsmax anchors and he discuss the public support for Pride being demonstrated by two fast food companies, Chipotle and Burger King. Chipotle recently announced two events, Chipotle Queen of Pride and a Chipotle Drag Lunch, in conjunction with three iconic drag queens: Trixie Mattel, Kim Chi, and Gottmik. Money from the promotion will be going to the Human Rights Campaign, GLAAD, and The Trevor Project.

“If you go to Chipotle and you buy one of these drag queen burritos, they’re giving a dollar to organizations that support children transitioning into different genders…Now I have to boycott Chipotle and it’s one of the worst days of my life.”

This is obviously a gross mischaracterization of all three organizations, who work with LGBTQ+ people on all sorts of programs. They support transgender youth, but that’s because they comprise a community that is constantly under attack from conservative talking heads like this—and GOP lawmakers.

They moved on to discuss Burger King, who recently tweeted what the trio considered to be a barbed remark about Chick-fil-A, and their habit of closing on Sundays. And donating to homophobic campaigns.

There’s a lot to unpack, but the idea of drag queen burritos has definitely caught Twitter’s imagination:

It’s true that Newsmax is constantly complaining about “cancel culture” without acknowledging they’re participating in it by encouraging boycotts.

And if you’re gonna boycott Chipotle, there are plenty of better reasons why you should:

Companies should just give queer people money all year round, if they want my business.