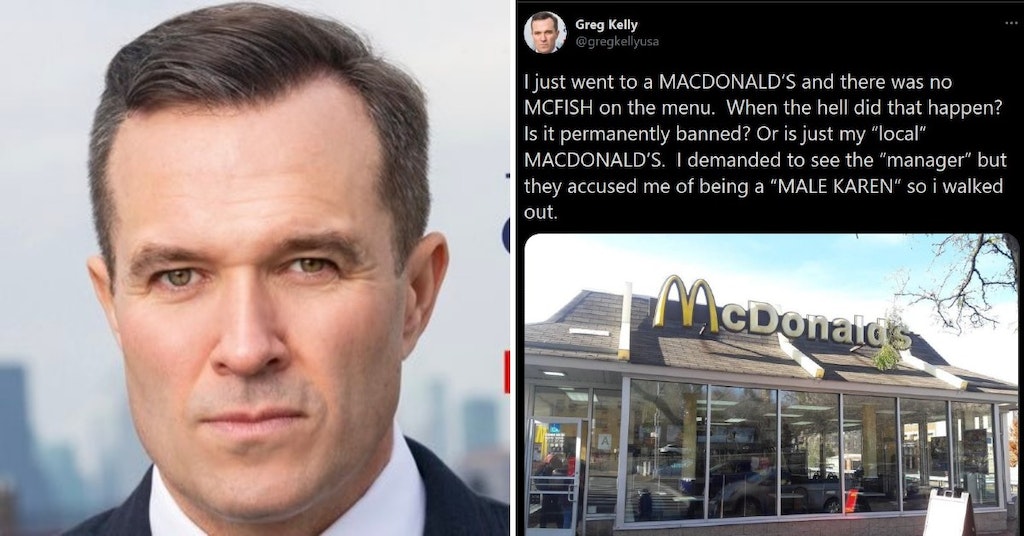 Newsmax show host Greg Kelly is getting some attention on Twitter for a bizarre tweet accusing some McDonald’s employees of calling him a “MALE KAREN” for demanding to speak with the manager over a menu item that doesn’t exist.

Kelly seems to be taking a page from the book of Trump in the way he tweets, putting random words in all caps and quotes in something that reads like a joke until you see the rest of his Twitter page.

“I just went to a MACDONALD’S and there was no MCFISH on the menu,” he wrote. “When the hell did that happen? Is it permanently banned? Or is just my ‘local’ MACDONALD’S. I demanded to see the ‘manager’ but they accused me of being a ‘MALE KAREN’ so i walked out.”

As many have pointed out, there is no such menu item as the “McFish” at the restaurant spelled “McDonald’s.” Their fish sandwich is, of course, called the Fillet-O-Fish. Either way, the removal of a menu item you happen to like isn’t worth talking to the manager, who probably isn’t responsible for those decisions anyway.

People are also questioning the claim that the manager called Kelly a “male Karen.” As accurate as that may be, few fast food restaurant managers would be willing to risk their jobs even to tell off someone as annoying as Kelly, but if it’s true, please give that employee a raise.

The jokes poured in like a McMilkshake as “MCFISH” trended on Twitter, and these are just some of the best ones: