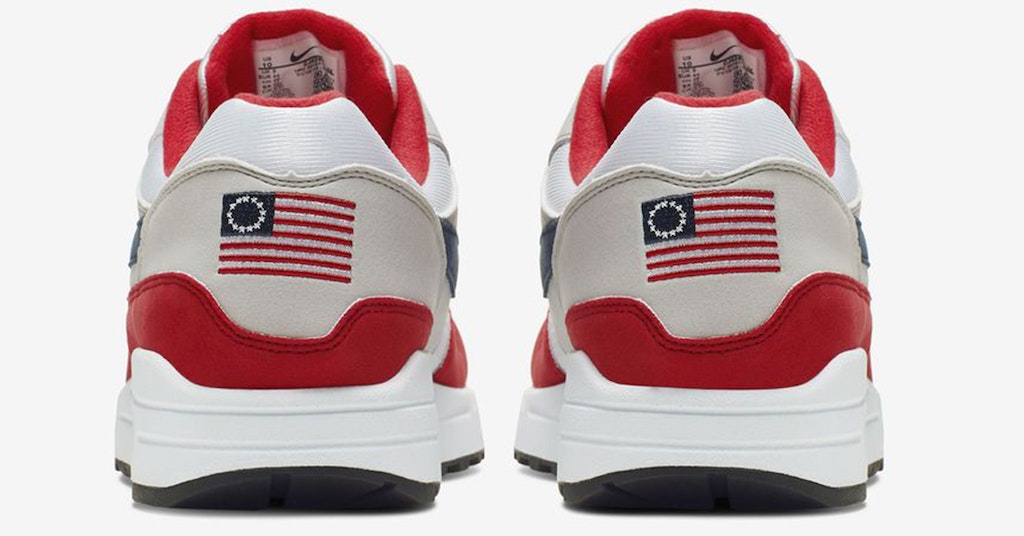 Nike has pulled their new Air Max 1 Quick Strike Fourth of July sneaker after former NFL player and activist Colin Kaepernick voiced a complaint to the brand, reports the Wall Street Journal. The sneaker, which was released as a July 4th limited edition, features embroidery of the Betsy Ross American flag.

The flag, Kaepernick reportedly explained, is evocative of the late 1700s, when the Mid-Atlantic slave trade was at its peak. The Betsy Ross flag has also been adopted by white supremacists groups, including the terrorist “patriot” movement, according to the Southern Poverty Law Center.

“Nike has chosen not to release the Air Max 1 Quick Strike Fourth of July as it featured an old version of the American flag,” Nike said in a statement to CNN. The flag’s distinctive circular star design represents the original 13 colonies of Revolutionary America. Nike had intended for the sneaker to commemorate this year’s Fourth of July.

Nike thinks American flag is symbol of oppression? What planet are you on? Nike gladly allows Chinese Communist Party to tell it what products to sell while building its business around sweatshop labor. Nike is anti-American, pure & simple. https://t.co/AgHkCnVi33

The Governor of Arizona, Doug Doucey, pulled tax incentives offered to Nike to build a manufacturing plant in the state, reports CNBC. The factory was projected add up to 500 jobs to the area. On Twitter, Gov. Doucey wrote that he is “embarrassed for Nike.”

Words cannot express my disappointment at this terrible decision. I am embarrassed for Nike. 3/

It is a shameful retreat for the company. American businesses should be proud of our country’s history, not abandoning it. 6/

The same folks who burned their Nike apparel last year after the company backed Kaepernick’s decision to kneel during the national anthem in protest of police brutality against POC are threatening to do so again, many calling the move to pull the shoe “unpatriotic.”

I didn’t burn all my ⁦@Nike⁩ stuff last time but I’ll remedy that now. The swoosh is forever banned in this household. I guess Phil Knight is good with this, Shoe Dog will make for good kindling. ⁦@nikestore⁩ ⁦@nikegolf⁩ ⁦ https://t.co/h0X4O3bkUg

This politically correct nonsense has gone too far, as has the increasing tendency to take offense at everything and anything. The Betsy Ross flag is not a racist symbol; it’s our nation’s first flag. https://t.co/gIUksJlQPs

Still, as with any supply and demand, the Besty Ross sneaker’s price is now skyrocketing on the secondhand market, reports CNBC. The shoe is fetching upwards up of $2,000 on StockX — an ironic side effect of America’s revolutionary brand of capitalism.