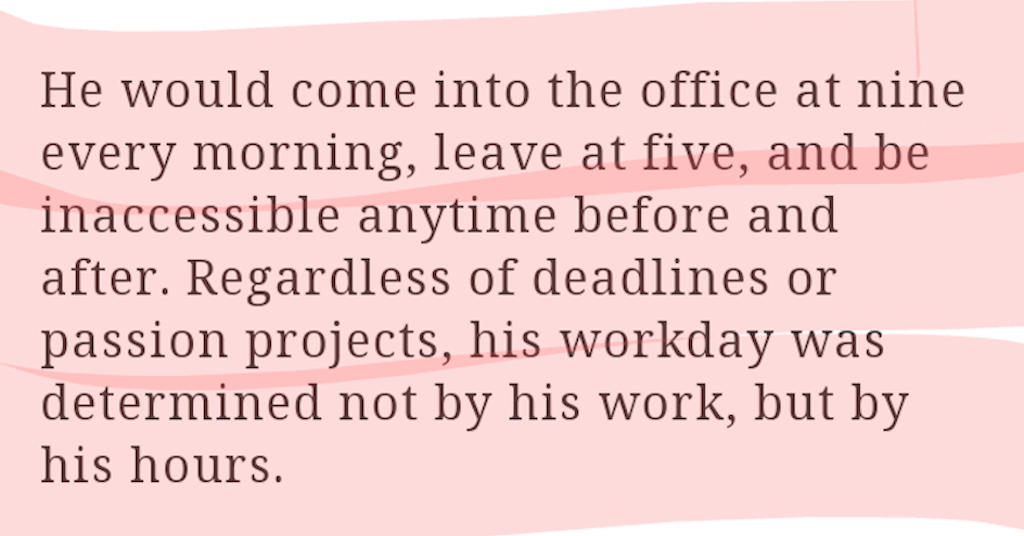 Work-life balance is something many of us are having trouble maintaining. It seems like people get paid less to do more all the time, full-time jobs are disappearing, and contract working is becoming the norm, demanding everyone commit to the hustle. Who does that benefit? Definitely employers over employees, and yet they still find something to gripe about.

A recent op-ed written by a manager named Gabrielle Peterson for Fortune Magazine gives us a terrifying glimpse into how employers see all the people they hire: as robots who should have an on-off switch for whenever their employers need to fire them up. And they should not expect overtime!

The post got shared to Reddit’s r/ChoosingBeggars by u/RagingHomo_DaPenis (gotta know more about this user name) and it’s like every part of it is designed to enrage people. It starts with the title, “Want to work 9-to-5? Good luck building a career.”

In the couple of paragraphs in the screenshot, Peterson sh-t talks her employee who she fired for not wanting to work when he wasn’t being paid, describing him as “low-energy, uninspired, and an awful speller,” but the reason she fired him was because of “his insistence on boundaries.”

“He would come into the office at nine every morning, leave at five, and be inaccessible anytime before and after,” Peterson complained. “Regardless of deadlines or passion projects, his workday was not determined by his work, but by his hours.”

“You know what my passion project is?” letsgolesbolesbo responded. “Building a life outside of work with my spouse.”

This type of boss was someone a lot of workers felt they recognized, and they shared some stories of their experiences with them.

“I once had a boss who would give all the employees sh-t anytime they needed time off for an emergency,” said improbablynotyou. “He’d always tell people how he went to work instead of going to his fathers funeral like he thought that would inspire us. We all already knew he was a sh-tty boss, him telling us that just told us he was a sh-tty person too.”

Henryofclay said, “I had a manager give an ‘inspiring’ speech about how to get where he was he had to work long hours, miss his kids games…but he got to the top. All of us were just like, f-ck that, I’m not ditching my family for this shit. Surprise surprise, 90% of the staff are gone since I left.”

The worker that she described is also not an outlier—lots of people considered the hours they’re paid to be the hours in which they will work.

“My workday ends when I leave,” wrote cards-mi11. “My work phone goes on the counter not to be used until morning. I get all my stuff done, plus extra. I’m not going to stay late or do stuff at home unless they want to pay me for that time. That’s my time, not company time.”

“I went from a job where I was working 70 hour weeks to one where I explicitly cannot access work on my phone, and cannot be asked to work extra hours (without comp time),” wrote leonardoty. “I am infinitely happier.”

And Redditor mbklein, who has more experience in business-speak than yours truly, broke it down the real situation very nicely:

“She also said he was her first direct report. She’s a brand new first-time manager whose first attempt at managing was an epic failure and she’s here to blame it on the guy who wanted a life outside of work.”

Peterson might have meant it was their first time firing someone, but if so, her writing could also use some work. Finally, I must share this from ryo3000, who makes it clear why these demands for more work and no money are so unreasonable.

“People pay minimum wage and are surprised that they get workers doing minimum work. Like??? Do they fill just half the tank on their car and berate the car for not going ‘the extra mile’?”