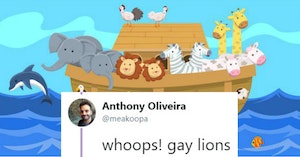 Writer and Revue Cinema’s Dumpster Raccoon Film Series Anthony Oliveira recently made an interesting observation on Twitter in a thread that has now gone viral. He noticed that in nearly every depiction of Noah’s Ark for children, the lions are indisputably gay.

If you’re not familiar, Noah’s Ark is the story of a guy who built a boat after God told him to because he was about to kill the entire world with a massive flood. So Noah built a huge ark and filled it with a breeding pair of every animal on Earth so that they could survive along with humans. However, many depictions of this ark include two lions with full manes. Lions with manes are, of course, male.

Oliveira found several works of art clearly made for children that makes this amusing error, which gets funnier every time Christians are homophobic.

these lions are in fact visually distinct, but i think the male is still gay…. pic.twitter.com/JtobOIqxIn

He did find one which seemed to attempt to avoid this gay lion trope, but what may have supposed to have been a female lion looks a little more like a tiger, which brings up additional problems.

He even found a Rennaisance painting that might depict gay lions, if those are indeed supposed to be lions. Rennaisance art is weird. Also, what happened to those unicorns? Did someone forget to feed them, or were they actually a gay pair who couldn’t reproduce? Please explain.

it's even a problem in renaissance art, except we have the usual…………..is-that-a-lion problems endemic to the period https://t.co/JWJXedZsox pic.twitter.com/Gm70SnmYph

Oliveira ends his thread by declaring the entire classic story of Noah’s Ark to be “queer as heck,” and he’s definitely right.

lesbian cows, gay lions, masc-presenting peacock pairs, and herds of unicorns – i think what we've learned is that when Christians whine that we "stole the rainbow" from them, we should remind them that their art of the Noah story has always been queer as heck

If the thread itself wasn’t amazing enough for you, people on Twitter have been chiming in with their own gay lion jokes.

Of course the lions are gay. That's why a group of lions is called a pride.

May I point out, that there can also be maned lionesses. So.

The first gay animals on earth were the lions on Noah’s ark https://t.co/ccpWcq8mtY

Other people have additional questions and comments about the story of Noah’s ark, including but not limited to the choice of animals brought on board.

Speaking as a childcare professional, there is nobody who loves anything more than kids love narratives where large numbers of characters are flippantly killed off.

Question, how was it climate controlled? Two of EVERY animal right? 2 polar bears + 2 iguanas + 2 moles + 2 sloths +
2 many maggots, unless they miraculously didn't defecate. #gaylionpride https://t.co/yY8dxJtE82

I really like how even though the fish are in the water, there are still 2 of each one

Oh no what happened to the other dolphin

All the people on earth died because they deserved it. Except the one good family, who were good because they were a member of that family. Definitely an alarming moral there

This is why Biblical literalism gets so weird. But if you insist, happy Pride!