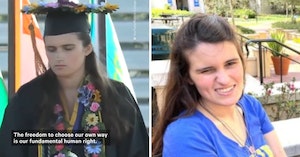 An autistic college valedictorian with motor issues that prevent her from speaking was able to give an incredibly moving speech at her graduation after she was provided with the basic accommodations that allowed her to type out her thoughts, which were delivered via an electronic voice.

Elizabeth Bonker graduated from Rollins College with a 4.0 and was chosen to give the graduation speech years after her high school principal was caught saying she should be barred from doing so while using an extremely hurtful ableist slur.

“A story on the front page of my local newspaper reported how the principal at my high school told a staff member: ‘The r—-d can’t be valedictorian,'” said Bonker.

The principal was extremely wrong.

Stigma against autistic people, particularly those who are unable to speak aloud, has often led non-autistic people to assume that their counterparts lack intelligence or don’t have anything of value to communicate. However, autistic folks, when given the accommodations they need, prove time and time again that the stereotypes are dead wrong—though they shouldn’t have to prove it.

“I have typed this speech with one finger, with a communication partner holding a keyboard,” said Bonker. “I am one of the lucky few nonspeaking autistics who have been taught to type. That one critical intervention unlocked my mind from its silent cage, enabling me to communicate and to be educated like my hero Helen Keller.”

Bonker has dedicated the rest of her life to ensuring that as many nonspeaking autistic folks are provided with these same tools in order to help them communicate all the wonderful and valuable thoughts that are otherwise trapped in their minds. She wants them to be allowed the freedom to be who they are rather than being forced to conform to non-autistic standards, which is extremely draining, painful, and even traumatizing for many autistic individuals.

“The freedom to choose our own way is our fundamental human right, and it is a right worth defending,” she said. “Not just for us, but for every human being.”

The valedictorian finished by encouraging other people to give their life in service to their fellow human beings, quoting two more of her heroes: Mr. Fred Rogers and Alan Turing, the latter of whom may have been autistic.

“Tear off a small piece from your commencement program and write ‘life is for service’ on it,” Bonker directed the audience. This refers to a small note found in Rogers’ wallet after he passed away.

“I leave you today with a quote from Alan Turing. ‘Sometimes, it is the people no one imagines anything of who do the things no one can imagine.'”

Bonker has already launched a non-profit organization called Communication 4 ALL dedicated to helping the estimated 31 million nonspeaking autistic people in the world receive the tools and instruction needed to make themselves heard in whatever way works for them. This will start with spreading awareness of the fact that these folks have so much to say and are not less than anyone else just because they have trouble with oral communication.

“C4A recognizes that shifting attitudes and deeply held mindsets is critical to achieving lasting social change,” the organization’s mission reads. “Through the power of story, we seek to transform the narrative of what non-speakers with autism can achieve and underscore the existence of proven solutions to address their communication needs.”