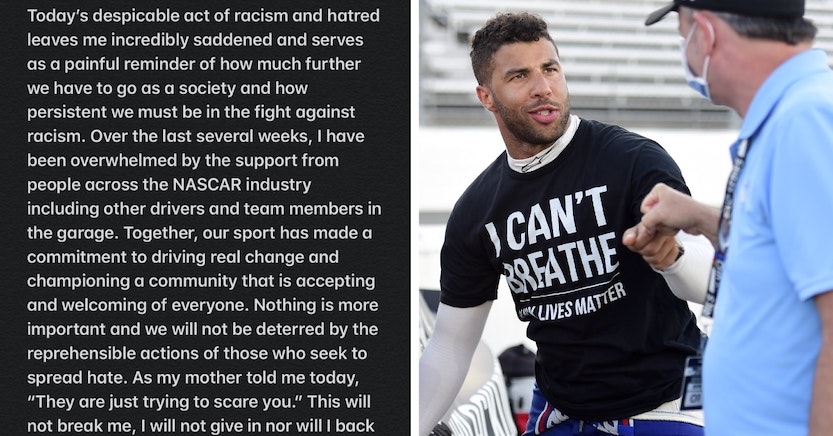 NASCAR has launched an investigation into a noose found in the Talladega Superspeedway garage stall of Bubba Wallace, the organization’s only full-time Black driver and the man who put pressure on them to ban the Confederate flag from all NASCAR events and locations. Wallace posted a response to the incident on Twitter vowing that he “will not give in nor will I back down.”

“Today’s despicable act of racism and hatred leaves me incredibly saddened and serves as a painful reminder of how much further we have to go as a society and how persistent we must be in the fight against racism,” he wrote.

The FBI has also begun an investigation into the incident, though they’re not yet sure if federal charges could be brought against the individual responsible.

NASCAR posted their own response calling the leaving of the noose “heinous” and vowed to find whoever is responsible and “eliminate them from the sport.”

This racist action evokes a threat of lynching soon after multiple Black individuals and other people of color were found hanging dead from trees in various parts of the country. In the space of a couple weeks, six Black individuals were found this way across four states, prompting fears of modern-day lynchings. All of the deaths were declared to be suicides by local reporters, but Black communities, in particular, are doubtful that their people would do this to themselves.

Thankfully, Wallace has received overwhelming support from fans and from his fellow drivers, some of whom tweeted on how sick and angry they were upon learning that someone put a noose in his space.

Still lost for words at what happen yesterday. That kind of hate shouldn’t be in our sport or in the world. We are all created equal and all bleed the same. NASCAR is all one big family and we should be building eachother up instead of tearing eachother down. #IStandWithBubba

I can’t begin to fathom the pain this action has caused. I stand with you @BubbaWallace. https://t.co/lV8v46ktWN

I’m competing against @BubbaWallace on the racetrack today, but #IStandWithBubba every day. You come at him with ugliness, you’re coming at all of us.

God help us. The level of evil it takes to do something like this is disgusting. This is enraging and heartbreaking all at the same time. pic.twitter.com/FovpeTwINu

There’s no place for this in our world and definitely not our sport. #IStandWithBubba https://t.co/SRlXjDECQI

Horrible news that came out last night. Cannot believe something like this could happen and the hate that one must have to do this. I’m praying that we are better from this #IStandWithBubba

NEW: Dale Earnhardt Jr. on noose found in garage stall of Black NASCAR driver Bubba Wallace: "I have confidence NASCAR’s leadership will find who did this and continue pushing us in the right direction...I hope Bubba is feeling loved and supported." https://t.co/EFYEdJ2UVV pic.twitter.com/rXkO18r6E3

NEWS: NASCAR industry sources tell me Richard Petty will attend today’s race at Talladega, to stand in solidarity w @BubbaWallace.
Petty, 82, has not attended a race since COVID-19 halt.
Sources told me Petty commented: “The most impt thing for me right now is hugging my driver.”

Per source, NASCAR drivers are planning to support @BubbaWallace today by pushing the 43 to the front of the grid in unison. Everyone will then stand around the car for the national anthem.

We all stand with you, Bubba Wallace.