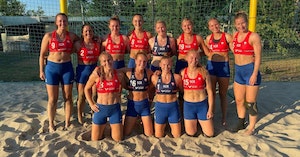 The Norwegian women’s beach handball team has been fined a total of 1,500 Euros (about $1,766) for choosing to wear shorts rather than bikini swimsuit-style bottoms during a game because they’re more comfortable than the wedgie machines that, for some reason, are required by league rules. But only for women, of course. Men’s handball teams get to wear the same kind of shorts the Norwegian women’s team is being fined for sporting because reasons.

Handball, by the way, is not volleyball—it’s an ancient sport played on a larger court and involves throwing a ball into an opposing team’s “goal,” kind of like a dry version of water polo. The beach version is, as you might expect, played on a beach setting, while another version is played indoors.

The fine was issued after a bronze medal game played against Spain’s team on Sunday for reasons of “improper clothing” and because sexism is still alive and well in the world.

The official International Handball Federation regulations state that women playing official handball games must wear bikini bottoms with a side width no wider than 10 centimeters, and must be a “close fit” and be “cut on an upward angle toward the top of the leg.” The men’s team gets to wear shorts that are “not too baggy” and come up at least 10 centimeters above the knee.

The fine was completely expected by the team because women’s handball players have been fighting to end these sexist and gross dress code discrepancies for years, asking what possible reason there could be to force women to wear bikinis other than so men can sexualize them. All the Norwegian team wants is the right to choose between bikinis and shorts.

“It should be possible to choose—not to say that they have to play like this,” said team coach Eskil Berg Andreassen. “If someone wants to play in bikini bottoms, they have the right to choose.”

He further pointed out that the bikini requirements could deter women from playing the sport, especially when it comes to women who practice certain religions or come from certain cultures that encourage or require a certain amount of skin coverage.

“We see in beach handball that girls from Arabic countries do quite well — Oman, Kuwait… also Pakistan,” said Andreassen. “But we never see an Arabic women’s team, they’re not playing beach handball.”

The good news is that the Norwegian Handball Association has thrown its full support behind the team for openly protesting the unnecessarily and creepily gendered dress code, expressing that they are tired of the issue being ignored.

“We are very proud of these girls who during the European Championships raised their voices and announced that ENOUGH IS ENOUGH,” they said in a statement. “We at NHF stand behind and support you. Together we will continue to fight to change the clothing regulations, so that players are allowed to play in the clothes they are comfortable with.”

The news about the fine has gone international, with U.S. outlets widely picking up the story in spite of general American ignorance about handball’s existence. All eyes are now on the International Handball Federation, which has reportedly threatened to disqualify the Norwegian team from their current tournament over their defiance of the dress code. The organization can now either change these pointless and downright cringey rules or make it into even more of a thing.

And it’s clear which side the majority of the public is on.