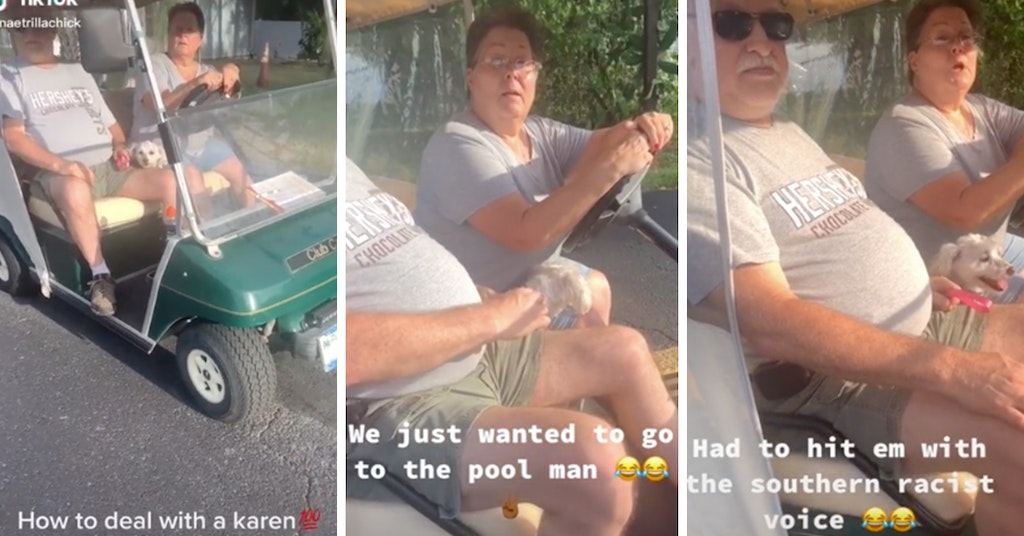 Two Black women dealt with a nosey Karen in a golf cart accosting them about going to the local pool without some kind of escort by explaining their own residential rules to them in a fake Southern accent and walking away in an incredibly satisfying video for anyone who has had the misfortune of encountering a Karen. The video was posted by Nae Alluré on TikTok where it quickly gained thousands of views before making it onto Reddit and Twitter.

The Karen and a scowling man who is presumably her husband rolled up in the golf cart with their little white dog to accuse them of not living in the area, and we all know the reason why.

When the women explain that they are staying with their uncle nearby, the Karen claims that they need him with them to go to the pool.

“Your uncle needs to go to the pool with you,” she says.

That’s when the fake Southern accent kicks in.

“Why my uncle gotta join me, ma’am?” Alluré asks.

“Because that’s the park rule,” says Karen, echoed by her husband.

“Well listen, the park rules ain’t statin’ that my uncle needs to attend me unless I am underage,” explains Alluré, ignoring Karen’s protests. “And therefore I’m valid to walk to the pool. So you know what, Karen? You have a good ol’ day and drive on back, and we gonna see you sometime soon. Bye. Bye-bye.”

The women then continue on their way as Alluré’s friend cracks up next to her.

The video is reminiscent of many others showing white people accosting Black folks that they assume don’t “belong” in their neighborhoods, sometimes ending in much less funny situations than this, such as when the police are called. Alluré did not post a follow-up, so hopefully, they were able to enjoy the pool in peace after this.

Commenters on Reddit have noted that their neighborhoods have similar rules about the local pool designed to keep “outsiders” from sneaking in and having a bit of summer fun. Some have claimed that even elderly women have been yelled at by Karens for going for a swim without an established resident to “escort” them.

“My mom would go swim laps at like 7 am. For years whenever she visited or was staying for a week at a time to take care of her parents. Nobody else would ever even be around, let alone in the pool,” wrote one user. “One morning getting out of the pool she got yelled at by a nosy b—h who told her if she isn’t a resident then she can’t swim alone.”

Over on Twitter, people expressed how tired they are of seeing Karens like this fail to ever mind their own business.