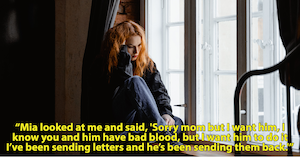 If you’re estranged from your partner, and your children are getting married, chances are there are going to be a lot of tough things to navigate.

On Reddit, one OP’s daughter is planning her wedding and very much wants her biological dad to walk her down the aisle. Unfortunately, Bio-Dad abused the OP. He also, according to the OP, basically contributed to their daughter’s upbringing by buying her expensive things and not showing up for important events.

When the OP heard that her daughter wanted Bio-Dad to be present at the wedding, she said something regrettable: that she would not let her daughter use her wedding dress or attend the wedding.

“My baby daddy was an narcissistic jerk and was often emotionally abusive to me and made me cry regularly. We had a daughter ‘Mia’ (22F) he left when she was 8 but regularly sent about $1500 a month to watch her while he traveled the world. Mia would often cry about him missing her birthday, but he would make up by it by sending her consoles and makeup, but it still hurt her that the guy didn’t even bother showing up to her Birthday,” the OP writes.

“Mia is getting married soon and we were working on the guest list and when we were talking about who was walking her down the aisle she would constantly switch the conversation and me and my husband asked about it and she said she wants her biodad to walk her down the aisle. My husband said, ‘Bullsh*t I’ve been raising you forever it’s not fair’ and Mia replied, ‘my real dad bought me a car, he paid for my surgery, and he even sent me money for a dog.’ My husband looked heartbroken and went out the house and told me he was going to the bar.”

“Mia looked at me and said, ‘sorry mom but I want him I know you and him have bad blood but I want him to do it I’ve been sending letters and he’s been sending them back.’ I then said something I regretted I said ‘if you invite him I’m not giving you my wedding dress or coming.’ Mia started tearing up and said fine don’t come and ran out now my family is calling me heartless now I feel alone.”

Is Bio-Dad even going to bother showing up? Is Mia totally clueless about her father’s abuse?

“Are y’all ignoring that her grown ass daughter wants to invite her mom’s abuser to her wedding because he buys her sh*t? NTA. My dad abused my mom and I’d never invite him to my wedding,” said

“I’m sure this situation is complicated for the daughter, but there is no reason for anyone to need to be in the same space as their abuser. OP is well within her right to refuse to enable this bullsh*t. Seems like the daughter is stuck in some kind of happy family fantasy land. I think she’s going to be hit with reality and consequences real soon if she keeps this up. NTA,” said

“NTA Sounds as if your AH narcissistic ex is working his charms on her and she’s buying it. If it happens, he may let her down on the big day. As at least one other person here has said, you should have a quiet talk when things calm down. If you haven’t given her the full story about him yet, maybe now is the time to tell it, so long as it doesn’t get heated with her again. A nasty slap in the face for your husband, but bear in mind that she’s likely being manipulated by a selfish liar who is playing at being daddy,” explained

“I haven’t seen a comment saying this but is it possible daughter is so starved for her biodad’s love and support that she thinks this is the way to get it? If she picks him over her stepdad for her wedding, maybe he will finally be there for her and be in her life and love her? It will never happen, but please stay in your daughter’s life and keep an eye on her so you can be there when she’s disappointed by her father the next time. And the next time after that. And the time after that. And on and on until she realizes he’s not worth it,” said

“You and your husband can be disappointed and hurt, but she’s allowed to have a good relationship with her biological dad even if he was an abusive partner and absent father in the past. And while her reasons for having a better relationship now do seem financially-driven, she’s also indicated they have been in contact and building a relationship for some time. So it is possible that he has become a better person and is now able to be another father figure to Mia. And tbh, I’d be more understanding if your reasons for not wanting him to be at her wedding were rooted in genuine concerns for your safety and emotional well-being – you said he was emotionally abusive, so I would imagine that even 20+ years later being in the same room as him would be triggering. But…your post reads as if the biggest issue here is that your husband doesn’t think it is ‘fair’ that Mia wouldn’t want him to walk her down the aisle. It’s her wedding. You’ve recounted how heartbroken your daughter was about him missing milestones – and now you want him to miss another because your husband doesn’t think it would be ‘fair?'” asked