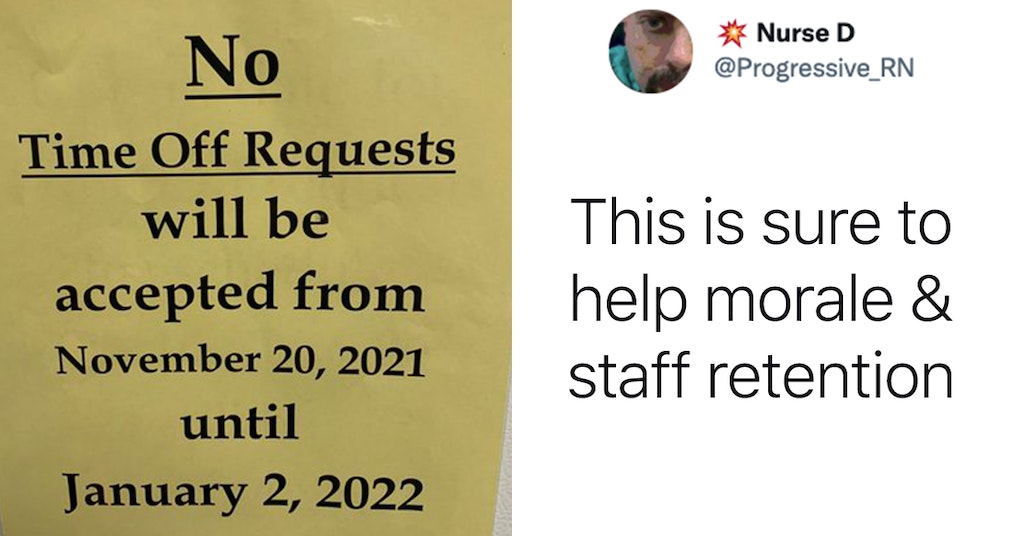 Much has been made this year about the worker shortage happening across the United States. While it seems to have mostly affected the restaurant and retail industries, any industry that requires interacting with, well, people has likely taken some sort of hit — especially businesses that aren’t treating their employees as well as they should.

While the pandemic is obviously the major culprit here, the root cause is still generally a lack of job satisfaction. But rather than realize or acknowledge that, some employers have instead doubled down on trying to rule their remaining employees with an iron fist with the crazy idea that that will actually stop more from leaving.

A nurse on Twitter shared an image of how his workplace is apparently dealing with all the chaos of the past two years, and it’s not exactly inspiring.

“No Time Off Requests will be accepted from November 20, 2021 until January 2, 2022,” the sign reads, essentially forbidding workers to take time off for any of the winter holidays.

@Progressive_RN, who posted the image, clarified that he works in bedside nursing, rather than a holiday-driven industry like retail, and doesn’t see any actual need for a demand like this.

“Because we generally work 3 [12 hour shifts] per week, less than half the employees are ever working on a particular day,” he wrote. “So make a holiday rotation, and whoever isn’t working that holiday can have some days off. It’s not that complicated.”

Regardless, the sign prompted a number of angry responses about how businesses continue to mistreat their employees — and how they’ve gotten away with it for so long.

Some folks are even sharing their own experiences with things like this, and there are plenty of stories.

All in all, people agreed that it’s just unnecessary and seems to show a company that doesn’t care about its employees, just what they can do for the company.