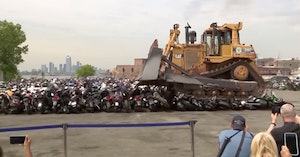 Dirt bikes and ATVs that are illegal to drive on city streets have been a problem in NYC for some time. Around 900 have reportedly been confiscated so far this year, with the NYPD claiming 80% of them go unclaimed by owners who can provide a proper bill of sale, suggesting that means most of them are stolen.

Regardless of whether or not that’s true, New York authorities have certainly made a point of confiscating and destroying these vehicles for the past several years, even implementing a $100 reward for tips that lead to an illegal bike in 2021.

They’ve also blamed dirt bikes, in part, for a rise in gun violence in the city.

With these claims have come theatrics, in the form of destroying a portion of these bikes and making sure the press and public catch wind.

Mayor Eric Adams was present and leading the charge, although the same spectacle also took place under Bill de Blasio.

And the responses have been the same in both cases, too — a mixture of people being glad to see the bikes gone and people wondering if this is really the best use of resources as well as why so much focus is being put on these bikes rather than more important issues of crime and safety in NYC.

Under de Blasio, there were also complaints that the focus on confiscating illegal dirt bikes disproportionately targeted Black communities, while riders say NYC should give them a place where using these vehicles is legal and safe.

But part of Adams’ platform involved calling on the NYPD to increase the war on dirt bikes, so here we are. Is this why we need cops?