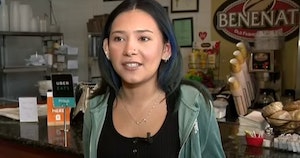 An NYC woman who was allegedly kidnapped and sexually assaulted was rescued thanks to a hastily-written note for help in her Grubhub food delivery order.

The incident occurred at around 5 a.m. on Sunday morning, according to NBC News. The Yonkers-based Chipper Truck Cafe, which is open 24/7, received a very concerning message in the “additional instructions” section along with a Grubhub order for a breakfast sandwich and a burger.

The note read, “Please call the police his going to call me when u delivered come with the cones please don’t make it obvious.”

The workers on shift at the time called the owners of the cafe to ask them what they should do.

“They’d seen the note on the order, and they called my husband, said ‘What should we do?’” said Alice Bermejo, co-owner of The Chipper Truck Cafe with her husband. “… He was like, ‘Call the police, can’t take any risks, better be safe than sorry.’”

The order had been placed to an address in the Eastchester neighborhood of the Bronx. They canceled the food and had the police go to the address instead, where they found a 24-year-old woman who claimed the man had choked and raped her, and that he was holding her against her will.

The suspect, 32-year-old Kemoy Royal, was arrested by authorities at the Eastchester home and has been hit with charges including unlawful imprisonment, strangulation, rape, criminal sex act, and sexual abuse.

Bermejo said The Chipper Truck Cafe is known in the community as a sort of neighborhood watch, given the fact that it has been around for 18 years and is open 24/7. Their employees have been known to call cabs for customers who need help getting home.

“This added a new level and new meaning to that,” she said. Still, “I don’t think any of us ever expected anything like this.”

While the Cafe owners haven’t met the woman they helped rescue, they did receive a phone call from one of her friends thanking them.

“They called to thank us and just to be like, ‘Thank you so much for helping my friend and just, you know making sure that she was fine,’” Bermejo told NBC News. “We really had no idea of the gravity of the situation until after everything had happened […] I hope someday we get to meet her.”

The day of Royal’s arrest, he was also charged with attempting to rape another woman on June 15 at his home. That woman managed to escape and it is unclear why the man hadn’t been arrested for the attempted assault until this past weekend.

If you are a survivor of sexual assault, harassment, or violence or want more resources on sexual assault, contact the Rape, Abuse & Incest National Network at 1-800-656-HOPE (4673) or the National Sexual Violence Resource Center by going to nsvrc.org.