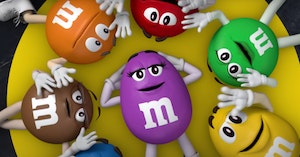 On September 28, the M&M’s company made an addition to the “spokescandy” family of anthropomorphic chocolate candies, with the introduction of a purple almond-shaped candy. Given that literally every other color of the rainbow is present in the lineup, and they even have a brown spokescandy, it only makes sense to have a purple one as well.

But it appears that conservatives have latched onto this new candy with a ridiculous vigor. It could be the color that incenses them, or the message of love and inclusivity, or the fact that the singing M&M’s clearly called her “she” in the song. Honestly, at this point, it’s hard to tell with these people, who get upset at a simple change like the type of shoes the green M&M wears or Minnie Mouse wearing a pantsuit.

Dan Ball, the host of OAN, a far-right, pro-Trump cable channel, devolved into a childish bully because he was so upset over the new purple M&M, and his utter collapse into a toddler tantrum was recorded on live TV.

Oh no, how dare M&M’s send a positive message.

“I think it’s a female character, but I’m pretty sure they haven’t said,” he went on, ignoring the fact that the other M&M’s used she/her pronouns while referring to her in the song. He then whispered, as if he was telling a scary story around a campfire, “Maybe it’s transgender.”

People replying to the video on YouTube are largely sarcastic, joking about the ad being a cinematic masterpiece and comparing it to films.

Other commenters pointed out how silly it was for people to care so much about the color or presentation of an animated piece of chocolate.