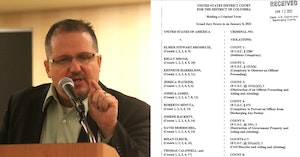 Someone has finally been hit with criminal charges for organizing the assault on the U.S. Capitol on January 6, 2021, and it’s the leader of the far-right extremist militia group known as the Oath Keepers, plus 10 co-conspirators, some or all of whom are also Oath Keepers members.

All 11 of these individuals have been charged with seditious conspiracy, defined as when “two or more persons in any state or U.S. territory conspire to levy war against the U.S. government.” The charge carries a maximum penalty of 20 years in prison.

The Oath Keepers leader and founder, Stewart Rhodes, is a former Ron Paul staffer and is listed by the Southern Poverty Law Center as a known extremist. He has expressed full support for former President Donald Trump after having regarded previous Republican presidents with suspicion and contempt. Rhodes founded the militia group in 2009, calling individual militias formed by the organization “Citizen Preservation” teams ostensibly meant to protect Americans from the U.S. government in the event it declares martial law and “scraps” the U.S. Constitution.

The Oath Keepers claim to reject all forms of bigotry, but members and leaders frequently make prejudicial and especially Islamophobic statements and even provided “security” for the 2017 “March Against Sharia” organized by anti-Muslim hate group ACT for America.

On January 6, 2021, eight to 10 members of the Oath Keepers stormed the Capitol with the pro-Trump mob sporting paramilitary gear and conducting themselves “in an organized and practiced fashion,” according to the criminal complaint. They are also accused of coordinating with fellow anti-government militia group the Three Percenters in the days leading up to the riot.

Rhodes sent multiple texts through the encrypted messaging platform Signal starting on Election Day, 2020, suggesting he intended to plan action to overthrow the results that quickly swung in favor of Joe Biden.

“We aren’t going through this without civil war,” he wrote on November 5. “Too late for that. Prepare your mind, body and spirit.”

Prosecutors believe that Rhodes and his fellow Oath Keepers were waiting for a sign or order from Trump to begin the assault on the Capitol, but when that didn’t explicitly come, decided that they didn’t need it.

“All I see Trump doing is complaining. I see no intent by him to do anything,” he wrote shortly after the assault began. “So the patriots are taking it into their own hands. They’ve had enough.”

Weapons were found at a nearby Virginia hotel where Rhodes and his co-conspirators were staying, allegedly to arm something they referred to as a “quick reaction force.”

The rare charges came as a surprise after over a year of the U.S. Justice Department seemingly attempting to avoid serious federal charges for those arrested for participating in the political rally-turned-riot that left the main Capitol building a mess and terrorized Congress. According to CNN, the department wanted to avoid the entire idea of sedition, with some members of the Biden administration concerned about “politicizing” the attempted coup.

Large sections of the American people, however, recently lashed out at Republican lawmakers and pundits for saying that the insurrection has been politicized by Democrats, pointing out that an issue can’t get much more political than the attempted overthrow of a democratic presidential election.

Sedition charges, however, are notoriously difficult for prosecutors to pursue due to bumping up against the nation’s stringent freedom of speech laws. There are proportionally few examples of these charges being issued in the U.S., reserved for the most egregious cases of alleged terrorist plots by nationalists and white supremacists, with exceptions being the relentless pursuit of accused communists during various red scares as well as Puerto Rican Independentistas.

Government prosecutors will be assisted in their case by other Oath Keepers arrested on conspiracy charges soon after the attempted coup.