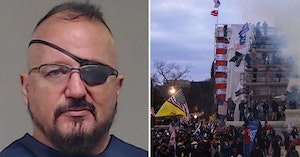 The estranged wife of the Oath Keepers founder, Elmer Stewart Rhodes, was thrilled to learn that her ex had been successfully convicted of seditious conspiracy over his involvement with the assault on the U.S. Capitol on January 6, 2021.

After Rhodes, along with the leader of the Oath Keepers Flordia chapter Kelly Meggs, was found guilty of this serious felony, ex-wife Tasha Adams expressed joy and relief at the news, saying that it was about time Rhodes reaped what he sowed.

“I am beyond happy,” Adams said to Insider. “He has absolutely never had to face a consequence in his entire life. This will be the very first time. He’s spent his life making others pay; this was past due for him.”

“He’s been getting away with everything his entire life and either wiggling out of consequence or forcing other people to face them for him,” she further told investigative reporter Jordan Fischer. “For the first time, he is facing the consequence of his own actions and barring any pardon after the 2024 election, he can now disappear into obscurity where he belongs.”

Adams fled from Rhodes with their six children and pursued a divorce after the Oath Keepers founder was caught choking their 13-year-old daughter. According to Adams, their older son Dakota had to intervene as he was coming home and caught sight of the assault on the family porch. After stopping Rhodes, the grown man challenged his son to a fight.

Their children also reported various forms of abuse by Rhodes, including grabbing them by the hair and throwing them into walls, as well as punching them in the gut. Things got even worse after Rhodes participated in the “Bundy standoff” of 2014, five years after forming his militia, as he began pulling a gun and threatening to shoot himself and even the family dog.

Adams and her kids expressed relief when they heard he’d been arrested on charges related to January 6.

The seditious conspiracy convicted also comes as a stark relief to those who have been hoping to see serious consequences applied to anyone involved in what happened that day. Rhodes was recorded meeting with other Oath Keepers to plan out their strategy for storming the Capitol and caught on security tapes moving huge amounts of firearms to be stored just outside D.C. city limits.

Even with the evidence the prosecutors had, proving seditious conspiracy is no easy feat. Director of Homeland Law at Cooley Law School Michael McDaniel laid out all the hurdles that need to be cleared in order to have a chance at getting a jury to convict.

“You have to have an agreement to carry out a criminal act. Secondly, it has to be criminal, it has to be illegal. Third, you have to knowingly participate,” he said. “The prosecutor has to prove that the individuals who have been indicted now knew that this was an activity on behalf of everybody involved. And then there has to be some overt act, you have to be advancing the goal of the conspiracy.”

The sentencing date has not been set, but Rhodes and Meggs could each be facing up to 20 years in prison time for the conspiracy charge as well as obstruction of an official proceeding. These two could beat the record for longest sentence related to the insurrection — 10 years for one of the guys who attacked D.C. police officers. Fans of the conviction are hopeful that this will set precedent for similar outcomes.