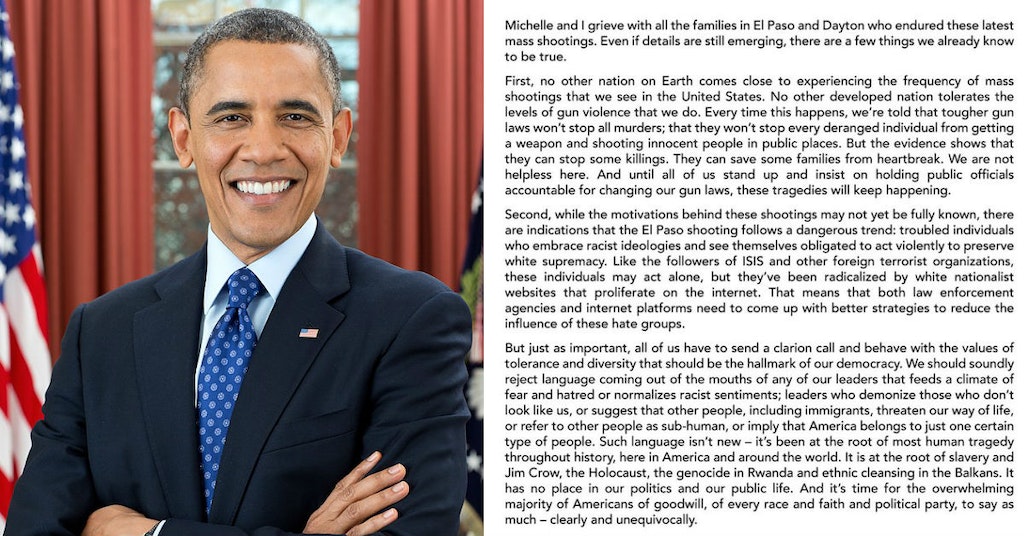 Former President Barack Obama has released an official statement signed by himself and Michelle in response to the El Paso and Dayton mass shootings that rocked the nation last weekend. In the tweeted statement, he condemns inaction on gun control, white nationalist terrorism, and leaders who spout rhetoric that fuels these problems.

The last paragraph is clearly referencing Donald Trump and his frequent and racist attacks on immigrants and people of color.

“We should soundly reject language coming of the mouths of any of our leaders that feeds a climate of fear and hatred or normalizes racists sentiments; leaders who demonize those who don’t look like us, or suggest that other people, including immigrants, threaten our way of life, or refer to other people as sub-human, or imply that America belongs to just one certain type of people,” the statement reads.

Obama also explicitly mentioned “racism, bigotry, and white supremacy,” saying that all must be defeated and have no place in America.

In a follow-up tweet, the former president also called out his fellow Democrats for talking about—but failing—to pass meaningful gun control legislation that might reduce the severity and frequency of mass shootings in the U.S.

Until all of us stand up and insist on holding public officials accountable for changing our gun laws, these tragedies will keep happening: https://t.co/reTnmcg3xo

Obama himself has said that one of the biggest regrets he holds about his eight years as President is his own failure to pass gun control legislation. To be fair, it’s a really difficult thing to do with the powerful NRA lobby and every Republican standing against you.

Aside from right-wing whataboutism, people are appreciating this response from the former president.

Thank You Barack and Michelle Obama. We miss you, your values, morals, compassion, empathy, And the RESPECT you gave to ALL Americans regardless of PARTY. Miss the Laughter and Happiness and Comradeship you brought to the White House ????????❤️you, #Obama pic.twitter.com/YxdPAlJGf3

Thank you for writing something intelligent and compassionate unlike the asshole we have now who can barely read and can’t tell the difference between Dayton and Toledo.

Mr. Obama you don’t have the slightest idea of how much you are missed. I thank you because you give us words of courage and hopes that this shall pass. We love you and your family. Thank you

Thank you Mr President for healing & uniting the nation. Here is when President Obama honored the lives that were tragically lost in Charleston,SC in 2015. This is how a president heals & unites a nation. “If we can find that grace, anything is possible.” pic.twitter.com/Y6K16uZ4ap

When you write from the heart instead of just reading words on a TelePrompTer.

We miss you, and unlike some people your life exemplifies your words.

Thank you for your pure heart, integrity and powerful words that will help move us forward. pic.twitter.com/ltVEdm4Zb9

Thanks for taking the time to put out a thoughtful, heartfelt response to these seemingly endless tragedies.

This can and must be a teachable moment.

Your words are steel. Your heart always where it should be.

I spread your message for our country’s sake.

We miss having a real president.

@JoyAnnReid asked “Who in America could walk out to a microphone today & speak credibly to the dangers we face from fellow Americans, in a way that consoles & begins to heal our wounds?” I had no doubt I’d soon hear from MY President. Still my POTUS until further notice. ????❤️???????? pic.twitter.com/J4NklXYDUq

This is what a response from a REAL President looks like.

Note: He even got the city right— unlike the current occupant who thinks Toledo and Dayton are the same!pic.twitter.com/AcPyYIf5sF

We know you care. We know you have humanity. This is why you are so loved and missed. Thank you @BarackObama ❤️❤️❤️#BringBackHumanity

Come back, please. This half-witted reality television host is a disaster.

Thank you for validating my thoughts & my feelings about this to a tee.

You have illustrated my anger, frustration & heartache as only you can.

As a mexican mother of 2 kids who start school in 2 weeks, their safety & mine is a concern.

Thanks, Obama. No sarcasm.