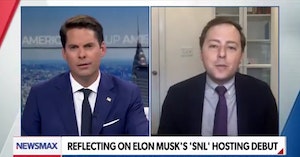 Newsmax, one of the right-wing “news” networks that become famous for borderline worshiping Donald Trump even more than Fox News during his presidency, for some reason had the bright idea to invite a former speechwriter for Barack Obama onto their show.

They brought on known liberal David Litt to talk about the Saturday Night Live episode hosted by our most visibly eccentric billionaire Elon Musk over the weekend in which he dressed like Wario, again for reasons that few can seem to comprehend.

But Litt wasn’t interested in talking about SNL or Musk, instead bringing up the Dominion Voting Systems lawsuit against Newsmax for pushing falsehoods about their company and products for months following the 2020 election.

After both admitting to not really watching the episode and then taking an opportunity to kiss up to Trump (saying he did well “with great ratings” when he hosted SNL), Newsmax anchor Rob Finnerty asked Litt what he thought of Musk’s performance. Litt’s transition from that to bringing up the Dominion lawsuit was as effortless of one of Obama’s speeches.

“What happened on SNL this weekend was that people made stuff up, and then said it on television like it’s true,” said Litt. “And that actually happens pretty frequently on American TV.”

“For example, in 2020, Dominion Voting Systems sued Newsmax over its false claims about election fraud. Newsmax was lying to its own viewers, and Newsmax had to settle that lawsuit. So actually, I just need to check in: Are you still telling that lie or are you telling new lies?”

Finnerty was, of course, not happy that Litt was bringing this up instead of talking about the comedy sketch show performance of the world’s richest walking human disaster.

In spite of it being Monday, Litt was well-prepared, as you’d think a Newsmax anchor would be to discuss the lawsuit against Newsmax.

“Well, I could see why you don’t want to talk about Dominion Voting Systems. Because if you do, Newsmax could get sued and lose billions of dollars, because these are lies,” said Litt.

Finnerty tried to force Litt back on the topic he had set, clearly irritated at the “gotcha” his network had set him up for by inviting Litt on in the first place but at least acknowledging that it was “a very funny moment” for the speechwriter. He then offered an ultimatum, essentially warning Litt to either talk about Musk or be kicked off the air. The writer’s choice was made clear by his next question.

“Did Dominion Voting Systems have any impact on the 2020 election?” Litt asked.

He was removed from the feed almost immediately so that Finnerty could pretend to be disappointed that they didn’t get to talk about Musk in a Wario costume.

This interview still went better for Newsmax than others they’ve had after the Dominion lawsuit was filed against them in which they’ve had to cut off people like pillow salesman Mike Lindell when they wouldn’t stop saying the same things that got the network sued. They ended up settling with Dominion for an undisclosed amount in late April and had to publish an apology letter to the company’s head of product strategy and security Eric Coomer for their role in promoting a conspiracy theory about him.