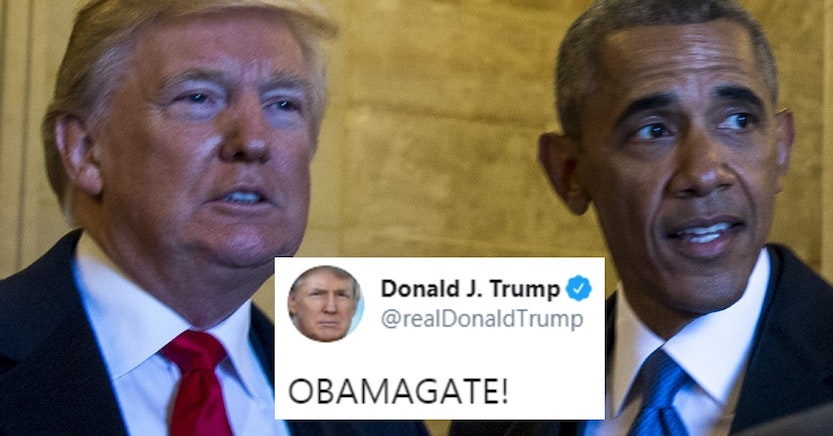 Former Presiden Barack Obama seems to have really hit a sore spot with the current president during his 30-minute call in which he called Trump’s response to the coronavirus pandemic “an absolute chaotic disaster.” The leaked audio from the call reached the internet on Friday and Trump spent the weekend screeching about it on Twitter.

In a stream of over 120 tweets on Sunday alone, Trump attempted to put together some conspiracy theories about Obama and the FBI conspiring to ensure Trump would be impeached and removed after he took office. His supporters quickly took up the cry, and “Obamagate” was soon trending on Twitter. Not long after that, #TrumpIsJealousOfObama began trending.

Obama has publicly been careful to avoid weighing in on Trump’s performance in office for these past three and a half years, preferring to stay out of the spotlight. Despite this, Trump has repeatedly attacked the former president, blaming him for his own failures and generally using him as a distraction when things in the U.S. are going particularly badly. Like right now.

Does anyone remember a President being completely obsessed at bringing down their predecessor? Anyone? Because this isn’t normal. This is a damned freak show. #TrumpIsJealousOfObama #TrumpMeltdown

Trump even tweeted out an article by The Federalist—a far-right rag that has recently argued that the president of the U.S. shouldn’t wear a mask and that more testing won’t help with the pandemic—which claimed Obama suspected Michael Flynn of being a Russian asset but hid it from Trump. This is the same Michael Flynn who pleaded guilty to lying to the FBI, and who was rescued by the Trump administration via the Justice Department dropping the charges against him last week.

So you think he is a Russian asset, but you’re letting him go? And crying about “Obamagate”?

Trump has always been very touchy on the subject of Obama, and this leaked audio appears to have sent him into a full meltdown, though it may also be an attempt to distract the public from just how badly the administration’s attempts to contain the coronavirus outbreak have been. Multiple staffers close Trump have been diagnosed with COVID-19, including Mike Pence press secretary Katie Miller and the president’s approval ratings when it comes to the pandemic are quite poor.

People are pretty sick of it.

Can we please all agree that this experiment of having a dumb orange TV host and shady real estate developer with no government knowledge, 5 kids from 3 marriages, 6 bankruptcies, 46 charges of sexual assault, and 35,000 lawsuits as president is not going well at all? #TrumpGate

I hope President Obama's criticism of Trump yesterday on National TV stung like a murder hornet.#TrumpIsJealousOfObama

I'm confused. Obama supposedly did everything to stop Trump from being elected except to stop him from being elected. Meanwhile Trump cheated, got caught cheating & wants the people who caught him cheating to be punished. #TrumpGate #TrumpIsALaughingStock #TrumpIsJealousOfObama https://t.co/DgcrEHrYAF

Today is #MothersDay & it’s a special occasion, a time for #Americans to put aside petty grievances & come TOGETHER to honor the most precious resource we have:
ME!
And time to acknowledge just how unfairly I’m treated, especially compared to LOSER #Obama!#TrumpIsJealousOfObama

...because obama looked great in a tan suit and he is a gentleman. Trump is not and he is jealous. #FBRparty #TrumpIsJealousOfObama https://t.co/FyaisZZr3Z

Funny how #ObamaGate trends when America sleeps and Russia is awake....

Then first thing in the morning... #TrumpIsJealousOfObama trends higher when America awakens and Russia sleeps.

Weird coincidence, don’t you think? What could possibly explain that? pic.twitter.com/QX0eGUfhtu

It's almost 930pm. We have an ongoing pandemic, a collapsing economy, and multiple battlefields abroad.

Trump did not bother to wish his wife or anyone else a happy Mother’s Day on Sunday, being too busy with his “Obamagate” tantrum.