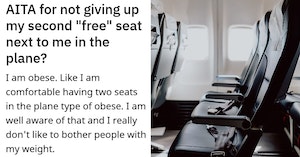 An airline passenger was made to feel like the a–hole for asserting their right to use the extra plane seat that they purchased for their own comfort and well-being when some guy decided to sit in it to be near his girlfriend without asking. This individual called themself “obese” and purchased two seats in order to avoid the common issue of discomfort and shame common among larger folks who have to fly in cramped airline seats make for thin people.

Unfortunately, even taking this expensive precaution can result in skinnier people making the situation feel awful, especially when they decide to take seats they weren’t assigned to without asking permission of the other people in the row.

“I am obese,” the OP starts. “Like I am comfortable having two seats in the plane type of obese. I am well aware of that and I really don’t like to bother people with my weight.”

This is the unfortunate reality for people like this, who may prefer to simply be called “fat” and find the term “obese” to be stigmatizing, as they attempt to exist the best they can. Seating in places like airplanes and theaters are generally not made with all shapes and sizes in mind, and the deep social prejudice against fat folks often causes thin people to blame them for a situation out of their control.

Nobody should have to pay twice the airfare just to make sure other people are comfortable and don’t treat them poorly because of how their bodies are. However, fat individuals who can afford it will often due so to avoid abuse from thin passengers, only to find themselves the target of abuse anyway.

“Some couple came and they both sat next to me because they got separate seats and they noticed the seat next to me was empty,” the OP wrote. “Exactly what I was afraid of happened. My side kept touching the guy next to me and he even pushed me a bit when he moved in the seat.”

It’s rude in the first place to take a seat that’s not yours without asking those next to it. But even when OP explained the situation, the couple refused to move.

“I was feeling extremely uncomfortable and asked him if he could go to his seat because I bought this one for my comfort. He told me no, since the seat is empty and he wants to be with his girlfriend. Well, I told him I understand but I feel uncomfortable and I paid for the second seat so exactly this doesn’t happen.”

Again the man refused, and the OP ended up having to call the flight attendant to get them to move to their own seats. In response, the couple directed the exact kind of fatphobic abuse the Reddit user paid double to avoid at them.

“The GF mumbled something like ‘F—ing fat b—h’ under her breath but nothing directly to me.”

Prejudice against fat people is so bad around the world that after being treated so badly, the OP actually had to ask if they were in the wrong. Thankfully, Reddit pulled through once again, assuring them that no, they were not in any way “the a–hole.” According to the OP in a response to a comment, the flight attendant was also very kind and helpful.