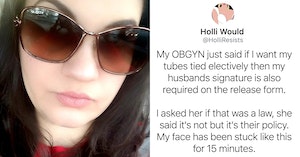 A cruel irony is that most often it’s the person with a uterus who is tasked with the responsibility of birth control, but we still live in a world where their choice about how to manage fertility can be invalidated—by the state, by their partners, and even by their doctors. This story about a woman named Holli who went to her OB-GYN to get her tubes tied is enough to enrage anyone who has had to navigate birth control options.

Holli’s tweet about her horrible doctor’s visit went viral, because it shows how easy it is for a woman’s choice to be taken away. She wrote that when she asked for the elective procedure of tubal ligation, which is sort of like the vasectomy of the uterus, her doctor told her she needed a signed permission slip from her husband. When she asked if this was a state law she was informed that it was just the doctor’s personal policy.

For the record, this is an illegal practice, but doctors can have an enormous amount of control over what someone can actually do with their own bodies because of their position of power over their patients. It’s not possible to know what Holli’s personal situation is: maybe she has the money to go to someone else, maybe someone out of her insurance network.

Maybe she lives in an area with many practice options and can take off work to go to more appointments. Maybe she even has the money and time to actually drag this doctor to court over violating her rights, and can make a huge change for everyone who visits them in future. But that’s a lot of maybes.

People are enraged on her behalf, and have explained how messed up this situation is:

The fact that this OBGYN does not believe that an adult woman can make her own independent medical decisions may not be illegal but is medically unethical and extremely patriarchal. It’s scary to know that doctors violate their oath like this all the time just because they can.

My best friend has polycystic ovaries and is in her late 30s. Absolutely does not want children but her gyn refuses to remove both ovaries. She had to beg to get one taken out and we all know that just means the remaining one will pick up the cyst slack.????

My young unmarried mom couldn’t buy a car unless my grandfather co-signed back in 1970.

Sadly, this is the policy of many OBGYNs. So it may not be easy to find a new one.

Despite having a uterine tumor the size of my fist causing me to nearly bleed to death, my constant requests for hysterectomy were ignored (you may want kids later!) and the emergency surgery I had was a mere bandaid. Now guess who's growing avoidable tumors again? pic.twitter.com/o49URvr7MP

It is. When a person is getting treatment of any kind, the facility cannot confirm to anyone, husband or otherwise, of their presence. Heads roll. I had to take a HIPPA class yearly.

my mom miscarried in 1970, was hemorrhaging & was heading into surgery, she asked for a tubal while she was under, doctor left the operating room to "counsel" my dad before dad gave his permission, I remember my dad yelling it's her body, do what she said, what is wrong with you

My two kids & I had finally escaped a monster, & I was able to obtain a divorce, with the help of a domestic violence program, & my doctor fixed his mouth to say he didn't want to tie my tubes, because I "MIGHT meet a man who wants kids." pic.twitter.com/N7pm5VXnqP

And some women have said they had to sign for their husband to get a vasectomy, so the issue does go both ways:

My wife’s signature was definitely required for mine.

My wife had to authorize mine

It would be messed up to lie to your partner about your fertility, though there are reasons why someone might do such a thing, but most people have probably discussed it with their partner before going into surgery. Is that really for a doctor to decide whether or not they’re legit? Your body, your choice. No permission slips should be required.