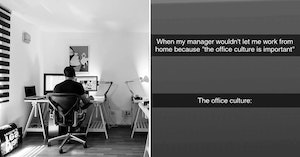 An alarming video posted in Reddit’s “Antiwork” forum is adding to the arguments around why working from home is better for people in the strong majority of circumstances regardless of what controlling managers might claim. In a blocked-out video, the user’s coworkers can be heard having a vicious argument which quickly escalates into one of them threatening to assault and/or murder the other.

Two individuals can be heard fighting over some bit of confusion involving loads that need to be transported by truck, with one worker accusing another of attempting to sabotage the whole company.

“It does matter, dude, you f—ed up the whole office,” says the first employee.

“Oh I f—ed up the whole office,” says the second. “Yeah, but when you f—ing have a load, and you’ve been on us at 5:00 ’cause you didn’t have a f—ing truck the whole time, or when you’re coming in here in the morning and you’re sabotaging s–t, and you’re f—ing taking loads off the board.”

The first individual begins to deny either taking loads off of the office board or otherwise sabotaging anything, but this only seems to enrage the other guy, who begins screaming and throwing accusations. Loud slaps can be heard that we can only hope are the angry man slapping his own hands together in an intimidation attempt and not actually hitting someone else. Then the death threats start coming, and at one point it sounds like there was some kind of scuffle.

This is followed by the sound of some papers being thrown or shoved around and a direct threat on the target’s life: “I will f—ing kill you!”

At this point, other workers intervene, as a lot of “dude” and “bro” is offered up and the angry guy is told to calm down.

It’s difficult to listen to this and feel that office environments are always healthy, happy places to be, so much better than your own home free of people who want to murder you.

As the years have dragged on since the COVID-19 pandemic first inspired a wave of U.S. workplaces to allow for work-from-home options, poll after poll has found that the majority of workers prefer things this way. In February of this year, one Pew Research Center survey found that 61 percent of working Americans were doing so from home not because their office was closed, but because they preferred it that way.

It’s no surprise what side the Antiwork users come down on when it comes to this topic.