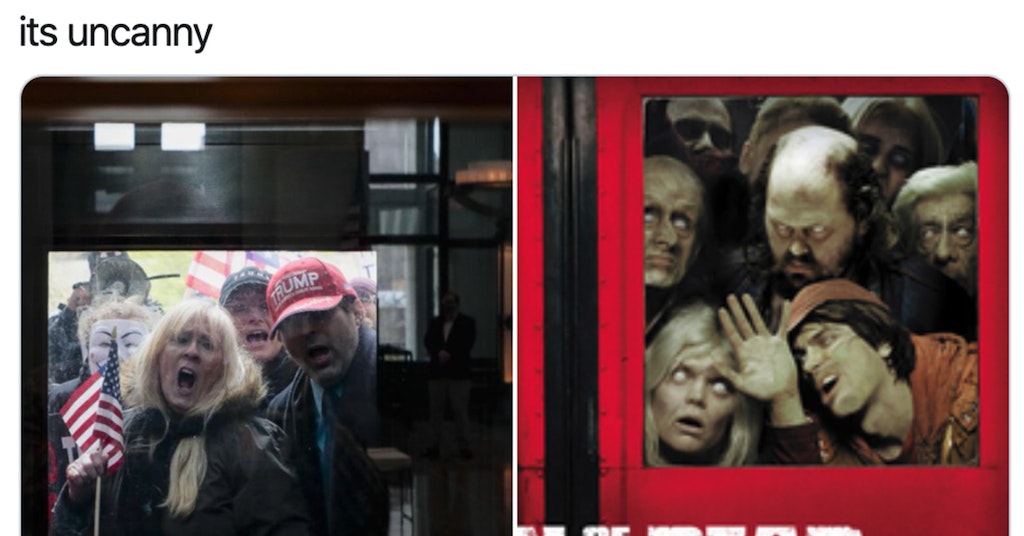 COVID-19 has taken over the U.S., with tens of thousands of deaths since the start of the year. State governors were initially left on their own to figure out how to implement social distancing, deciding at different times to give shelter-in-place orders. Since then, the federal government has begun to take more steps to intervene, but it seems to have done more harm than good in some cases.

One of the many ways President Donald Trump has caused more trouble is by implying that the economy is a bigger priority to the nation than human lives. He has suggested multiple times that the country should re-open before any health authority has deemed it safe. And his followers are taking his word over anybody.

In Columbus, Ohio, a group of protestors crowded outside of the Statehouse Atrium, demanding that Ohio businesses reopen. Photographer Joshua A. Bickel snapped a shot of them banging on a glass window, demanding Gov. Mike DeWine let them go back to Target:

Yes, they’re packed together, faces uncovered, and screaming with their whole mouths.

Will be forever haunted by this image of protestors in Ohio demanding the governor open businesses back up pic.twitter.com/P0nivaYSsY

The image went very viral because everyone pretty much recognized it for what it is: a still from a zombie movie.

As someone from Ohio I can tell you that this is simply how our whites behave all the time. https://t.co/ICc1LvE7bK

DO Y'ALL SEE THAT PURGE MASK BEHIND THE FLAG ? https://t.co/pSX2H7Rwyh

After the environmental artists getting the storytelling graffiti right, I now also have to apologize to zombie movies getting the "masses at the window" shot right. https://t.co/Wy1Zij0Row

We are living in a horror movie https://t.co/JhrcUNLso5

When there’s no more room in Hell, the mediocre will walk the earth https://t.co/K6tB900bDo

Tfw you haven't spoken to the manager in over a month https://t.co/cWFsg5zdxJ

A cult, willing to die for their leader… https://t.co/SvuErP0Poj

black studies called white supremacy a death cult for 35 yrs and pretty much predicted this image below but tell me humanities have no value 🙃 https://t.co/iGPqOOwley

im the guy in the reflection scratching his ass https://t.co/PaANEswDby

Holy fuck. This looks like something out of a zombie movie. https://t.co/fJv36HjgJw

Covid-19 is significantly more contagious then the flu and at least ten times more fatal but let’s crowd together to protest the government trying to protect us because rights. https://t.co/cgaStXl8K8

When there’s no more room in hell, the dead will walk the Earth. pic.twitter.com/hX9edMfJ8E