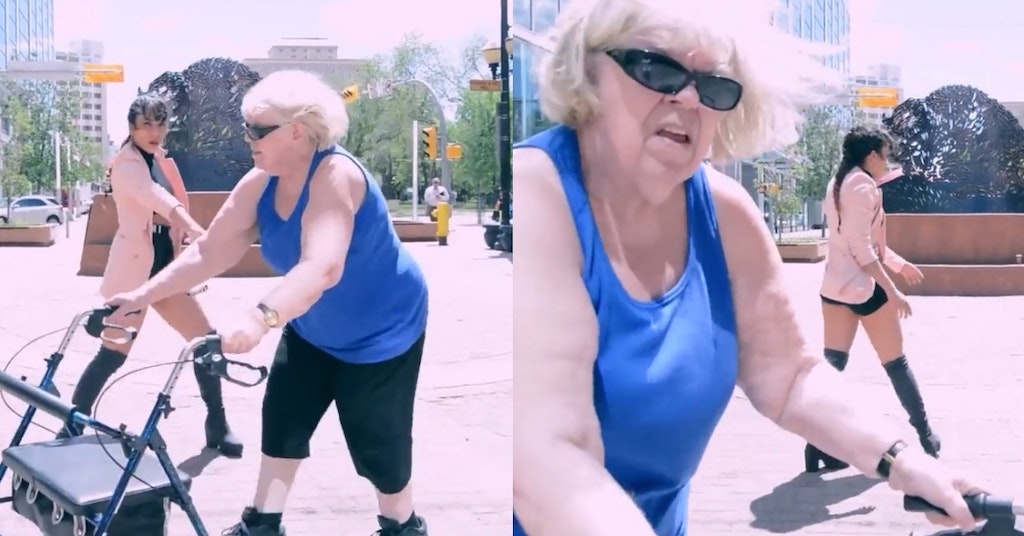 Video of an old woman losing her mind after seeing someone dancing in public is reminding people that we can never have nice things as long as Karens continue to roam the earth and bring everyone down.

The video itself was filmed in Regina, Saskatchewan, in 2018, as part of an ongoing series from Cindywii filmed featuring complex choreography throughout public spaces. But the outtake of an aggressively rude bystander trying to interrupt the experience has been making the rounds on Reddit in recent days.

Despite the dancer clearly facing the camera and focusing on her work, an old lady approaches her from behind, immediately demanding to know “what’s going on here.”

Cindy ignores her, even as she crosses in between her and the camera twice, allegedly throwing out some curse words we can’t hear in the video.

“This is not a burlesque class!” she yells. “I’m going to call the police.”

A note on the video then accuses the woman of throwing out some racial slurs that were also omitted, before she throws out a claim that it’s “illegal to do this,” presumably referring to uh, dancing in public.

Why an old woman would get so upset over somebody who clearly isn’t bothering anyone or asking for money is just beyond the imagination, but her attempt at tyrannical control over a public space has viewers drawing comparisons to the movie Footloose, in which dancing, of course, was famously banned until Kevin Bacon shook things up.

“Filmed in Regina Saskatchewan. It’s pretty much the Canadian equivalent to the Footloose town,” wrote one Redditor.

“Where’s Kevin Bacon when you need him?” asked another. “This all could have been avoided.”

Most people rightly complimented Cindy on her decision to ignore the woman and just keep doing her thing, and at the end of it all, despite the woman’s attempted interference, the final video seems like it was worth the trouble.