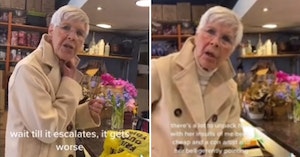 A bizarre interaction between a racist and classist white woman and a young TikTok user is baffling viewers across the world as they watch this lady accuse her challenger of everything under the sun, including lying about being gay. The TikTok user now has her account set to private, but a compilation of her videos showing over three minutes of arguing between the two landed on the “Public Freakout” forum on Reddit.

According to the post’s title, the young woman stood up for the cashier at a flower shop, and she can be seen at the beginning of the footage telling the old lady that she’s being rude. It all goes extremely downhill from there as the white lady trots out every insult she can think of to counter the accusation of rudeness.

After the video skips ahead, the TikTok user challenges this woman on bringing up God, and gets threatened with a call to “the media.”

“Oh, now you’re bringing God into this,” she says. “What does your god think of you bullying service people, huh?”

After the old woman claims it’s “none of your business” and the TikToker points out that she’s bullying people who can’t stick up for themselves for fear of being fired, she says she’s going to “phone the media on you.” Sure, just call 1-800-media and we’ll get right on that. And any articles that happen to come out about this interaction will surely go in your favor.

The argument then gets into who does and does not have history in the area where they live, with the old lady accusing the younger of various things including lying about living there, saying “nobody looks like that in this neighborhood.”

“I’m a gay!” the TikToker replies. Then it gets really weird.

“No, you’re not,” the old woman declares.

“Prove you’re gay,” the other demands. “Prove it.”

Dealing with homophobia, racism, and classism all at once in public is never an easy thing and we can’t tell anyone how they should have responded in that moment, but it might have been an ideal opportunity to loudly invite this lady into the bathroom. You know, if she really wants proof. Not that anyone should have sexual contact with bigots, but the invitation would have been funny.

The TikToker accuses the old lady of knocking her over and being rude to workers, while the other calls her younger neighbor “trash,” a “troublemaker,” a “liar,” and repeatedly, a “con artist,” and continues to deny everything the person filming says about herself. She then declares that the young woman has “nothing going” for her and counters an offer to see her income tax receipt by declaring how rich she is to the whole store, which explains a lot.

“I’ve got more money than you’ll ever have,” she says.

Then, big surprise, she gets racist. After again insulting the TikTok user’s appearance and taking issue with her hair color, suddenly race is very much involved.

It’s probably impossible to explain why someone would declare a tattoo on someone’s body to not belong to them, but all of that seems to be mired in racist stereotypes about people from the massive continent of Asia.

The entire video is a disaster that well deserves its spot on this forum, as commenters have widely pointed out.