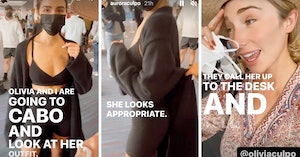 Olivia Culpo Told To Cover Up On American Airlines Flight

Olivia Culpo had some airline drama to deal with after being told her clothing was inappropriate for the flight.

“Olivia and I are going to Cabo and look at her outfit,” she said. “She looks cute. She looks appropriate, no? They call her up to the desk and tell her that she needs to put a blouse on, otherwise she can’t get on the plane. Tell me, is that not so f—ked up?”

The women even spoke with another passenger who was also wearing a crop top but wasn’t told to change her look.

Olivia ultimately snagged a hoodie from boyfriend Christian McCaffrey, but the situation clearly bothered everyone involved.

Aurora later shared a collage of what appears to be the exact items her sister was wearing as she attempted to board the plane, calling it the “Get kicked off @americanair starter kit.”

The way airlines seem to apply dress code policies unevenly among passengers has long been a point of frustration, and many have been called out for the discrepancies in the past — especially as it almost always seems to be women who are asked to change.

Reactions to these incidents always seem to be split as well, with some folks yearning for the olden days where people dressed up fancy to fly on a plane for some reason, and others suggesting airlines take it down a notch and stop trying to police irrelevant things.

The group eventually made it to Cabo all the same, and can presumably wear whatever they want until they board that return flight home.

American Airlines reportedly had no comment on the incident.