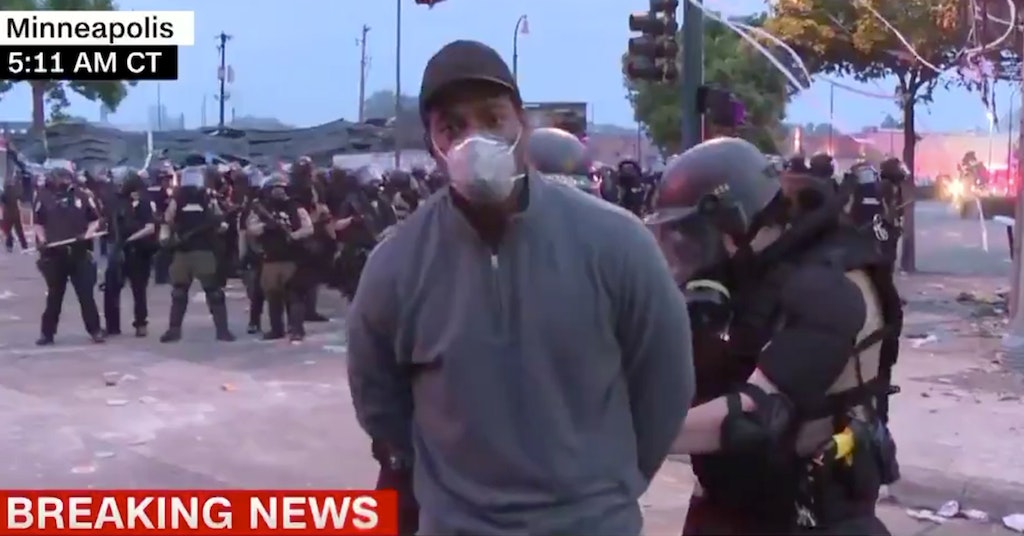 CNN journalist Omar Jimenez was taken into police custody while filming a live broadcast in Minneapolis, leading to an absolutely stunning broadcast of police slowly arresting each member of his crew until their camera was left rolling on the ground. The police seemed unaware of the camera being on and seemed also to be unaware of remote CNN reporters viewing and commenting on what was happening as it was aired on television.

A clip of the altercation has been widely circulated. Despite the lack of overt violence, it is a deeply unsettling and scary scene. It begins with Jimenez trying to ask the police where they would like the crew to stand in an attempt to comply with the officers. They seem to be silently surrounded by state police in riot gear.

“Put us back where you want us,” Jimenez says. “We are getting out of your way, so just let us know. Wherever you want us, we will go.”

Then, out of nowhere, they put him in cuffs and lead him away from his colleagues. The wall of cops opens, he’s led through, and it closes again. There is no explanation for his arrest offered and one-by-one the rest of the crew is taken as well.

Before being taken, Jimenez asked several times for a reason why he was being arrested. He received no answer. The rest of the CNN crew also attempted to talk tot he officers to no avail.

“You’re arresting him live on CNN. We told you before that we are with CNN,” one production member tried to warn them.

They tried to continue to report on the scene, with one member even saying they wanted to promote the work the officers were doing. He sounds fearful when he says it. Another says that Jimenez “was respectfully explaining to the state police that our CNN team was there and moving away as they would request.”

The video has been very disturbing for many:

My eyes welled with tears viewing this. It shows a turning point in the war that Trump is waging. That’s not hyperbole. Destabilizing the election. Press freedoms compromised. Steel yourself. Expect more of this. Then ask yourself: what will you do? pic.twitter.com/oc6zpqQskx

Watch this: Omar repeatedly asks officers to tell him where to go as they surround him. I don’t hear any reply. Minutes later, he is arrested. https://t.co/hCmmwf17kn

CNN crew has been released. Governor has apologized.

For the record: arresting journalists is the kind of thing that happens in dictatorships and authoritarian regimes.

We live in a democracy. https://t.co/SLFtZ7BaBe

The camera on the ground, still rolling, the state patrol standing guard, the journalist arrested, the fire still raging, the smoke filling the sky.

CNN immediately called for the team’s release, saying the arrest was a clear violation of their First Amendment rights.

A CNN reporter & his production team were arrested this morning in Minneapolis for doing their jobs, despite identifying themselves – a clear violation of their First Amendment rights. The authorities in Minnesota, incl. the Governor, must release the 3 CNN employees immediately.

Minnesota Governor Tim Walz seemed to recognize that quickly, intervening for the journalists’ release. He read a statement on air condemning the actions of the state police, saying, “It was totally unacceptable and totally inadvertent what happened. They clearly had the right to be there, the CNN team.”

He also apologized to CNN president Jeff Zucker, who he said he called within minutes of the arrest.

“I take full responsibility,” Walz said. “There is absolutely no reason something like this should happen. Calls were made immediately. This is a very public apology to that team: It should not happen.”

The governor admitting that this was a heinous thing to do is good, but not hardly good enough. This is how the police are willing to act on camera to a high profile and protected group of people. Imagine how everyone without those protections is fairing in Minneapolis today.